Stephen Garnett and Donald Franklin (Charles Darwin University) have edited a newly-published book that considers the likely effects of climate change on Australian birds.  The book includes adaptation profiles for those Australian species that are considered both highly sensitive and highly exposed to climate change.

“This is the first climate change adaptation plan produced for a national faunal group anywhere in the world.  It outlines the nature of threats related to climate change for the Australian bird taxa most likely to be affected by climate change, and provides recommendations on what might be done to assist them and approximate costs of doing so.  It also features an analysis of how climate change will affect all Australian birds, explains why some species are likely to be more exposed or sensitive to it than others, and explores the theory and practice of conservation management under the realities of a changing climate.

“Despite the enormous amount of data available on the importance of gut microbiota in vertebrates (especially mammals), there is no information available on the microbiota of seabirds.  Procellariiformes are long-lived seabirds that consume a diet high in lipids and are characterised by their ability to produce and store large amount of stomach oils through the partial digestion of prey (with the exception of the Pelecanoididae).  Examining the faecal microbiota of three Procellariiform species (short-tailed shearwater, common diving petrel and fairy prion) provided a unique opportunity to not only characterise the gastrointestinal (GI) microbial composition of seabirds but to also examine the influence of stomach oils on the microbial community.  The results indicated that Procellariiform seabirds host a highly diverse community of faecal microorganisms, dominated by three phyla (Firmicutes, Proteobacteriaand Bacteroidetes) and that each species has its own species-specific GI microbiota.  In addition, significant differences were observed in the microbial communities of oil-producing and non-oil-producing seabirds. This study is the first whole-community examination and classification of the faecal microbiota of Procellariiform seabirds.”

Dominic Rollinson and colleagues at the Percy FitzPatrick Institute of African Ornithology, University of Cape Town, South Africa have published in the journal Polar Biology on diving behaviour of the White-chinned Petrel Procellaria aequinoctialis.

“The white-chinned petrel (Procellaria aequinoctialis) is the seabird species most commonly killed by Southern Hemisphere longline fisheries.  Despite the importance of diving ability for mitigating longline bycatch, little is known of this species’ diving behaviour.  We obtained data from temperature–depth recorders from nine white-chinned petrels breeding on Marion Island, southwestern Indian Ocean, during the late incubation and chick-rearing period.  Maximum dive depth (16 m) was slightly deeper than the previous estimate (13 m), but varied considerably among individuals (range 2–16 m).  Males dived deeper than females, and birds feeding chicks dived deeper than incubating birds, but dive rate did not differ between the sexes.  Time of day had no significant effect on dive depth or rate.  Our findings will help to improve the design and performance of mitigation measures aimed at reducing seabird bycatch in longline fisheries, such as the calculation of minimum line sink rates and optimum aerial coverage of bird-scaring line.” 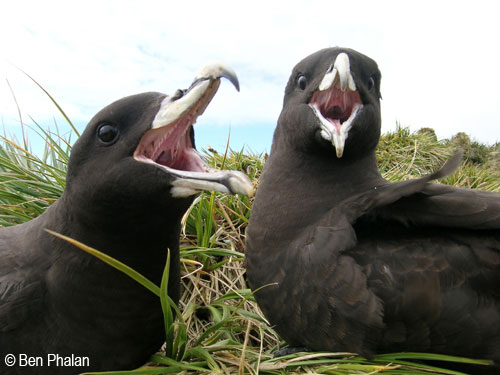 The Conservation Services Programme (CSP) of New Zealand’s Department of Conservation works to reduce the impact of commercial fishing on protected species in New Zealand fisheries waters.  Direct commercial fishing impacts include species being caught, killed or injured in nets or on lines (bycatch).  Impacts may also be indirect through the modification of habitat or food availability.  The CSP monitors the effects of commercial fishing on protected species, studies species populations and looks at ways to limit bycatch (click here).

At regular meetings of the CSP’s Technical Working Group, reports on ongoing projects are considered, many of which deal with aspects of the biology and conservation of ACAP-listed albatrosses and petrels.  At its most recent meeting, held earlier this month, reports were considered for six species of albatrosses (Buller’s Thalassarche bulleri on The Snares, Campbell T. impavida and Grey-headed T. chrysostoma on Campbell Island, Gibson’s Diomedea antipodensis gibsoni on the Auckland Islands, Salvin’s T. salvini at sea and Southern Royal D. epomophora at the Aucklands).

Buller's Albatross at The Snares, photograph by Paul Sagar

Reports and presentations were also given on the Flesh-footed Shearwater Puffinus creatopus, on sea trials of the Kellian Line Setter and on characterising bottom longline operations in relation to risk factors for seabird capture.

Click here to access all the above reports.  Reports made to earlier meetings of the CSP on ACAP-listed species and on mitigation activities are also available on-line.

"The American Bird Conservancy (ABC) is the only conservation group whose sole mission is to conserve native wild birds and their habitats throughout the Americas.  The ABC accomplishes its mission through direct action and by engaging the people, groups, resources, and strategies needed to succeed.  It undertakes the full spectrum of bird conservation issues using advocacy and habitat conservation strategies.

1. developing solutions to threats facing the oceanic birds of the Americas;

2. informing and educating policy-makers and resource managers about seabird conservation needs and solutions; and 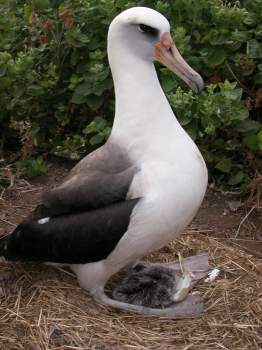 "The ABC is seeking a dynamic conservationist with the drive and entrepreneurial spirit to develop programmes and advance policies that will make a difference for seabirds.  The Seabird Program Director is responsible for implementing an ambitious strategic plan for seabird conservation in the Americas; developing and implementing on-the-ground conservation projects to counter threats faced by the hemisphere's imperilled seabirds; developing capacity in partner organizations abroad; reaching out to US and foreign governments and helping to ensure adequate funding for the programme."

Contact This email address is being protected from spambots. You need JavaScript enabled to view it. for more information, including deadline (7 July) and application details.