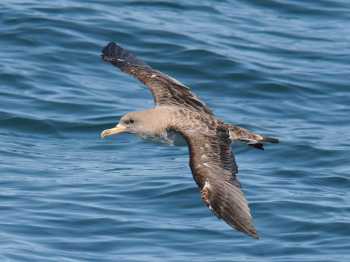 The ground-baiting campaign to remove Norway or Brown Rats Rattus norvegicus from the inhabited islands of St. Agnes and Gugh (connected by a tombolo) in the United Kingdom’s Isles of Scilly appears to have met with success.  Rat removal in the Scilly Isles will help protect small populations of Manx Shearwaters Puffinus puffinus and European Storm Petrels Hydrobates pelagicus that have been reported breeding on both islands.

The latest issue (No. 3 of March 2013) of the Isles of Scilly Seabird Recovery Project’s newsletter The Shearwater reports “[w]e are delighted to update you to say there has been no sign of rats on St Agnes and Gugh for the last 16 weeks at the time of writing this newsletter.”  However, a formal announcement that the rats are definitely gone will only follow the accepted two-year rat-free period in 2016.

The rat-removal phase of the eradication project was undertaken by Elizabeth (Biz) Bell and colleagues of New Zealand’s Wildlife Management International Ltd (WMIL), which previously undertook the feasibility study into rat removal from the Isles of Scilly.  They used 1036 commercial lockable and tube stations carrying poison bait distributed over both islands.  These stations alomg with "all the pieces of wire, flagging tape [and] bamboo cane" have now been removed.

Plans are now in place to ensure that biosecurity protocols are adequate to ensure rats do not reinvade the islands, with training workshops being run for the islands’ inhabitants.  As part of post-eradication monitoring, permanent stations have been set up around the coasts of St Agnes and Gugh.  They house pieces of chocolate wax known to be attractive to rats.

The newsletter also reports that the first “Manxies” have been sighted offshore on 21 March as the new breeding season approaches; hopefully one without the risk of breeding attempts being depredated by rodents.

For the European Storm Petrel, the Isles of Scilly represent the sole breeding site in England, with 1398 pairs.  The islands are also one of only two breeding sites for the Manx Shearwater in England with 171 pairs; the other being the island of Lundy in the Bristol Channel.

Click here for earlier reports in ACAP Latest News on the eradication attempt.

The eradication of rats and mice on the South Atlantic island of South Georgia (Isla Georgias del Sur)* remains on track, according to the March 2014 issue (No. 20) of Project News, newsletter of the South Georgia Heritage Trust.

The project is now halfway between Phase 2 and Phase 3 of the multi-year operation, with fund raising underway for the last season of aerial poison baiting of the introduced Norway Rats Rattus norvegicus and House Mice Mus musculus, due to take place in 2015.

Surveys in the 12 Phase-2 baiting zones treated in 2013 have not revealed any signs of rats or mice (utilizing chew sticks, wax tags. tracking tunnels and automatic cameras) and evidence of returning birdlife has been noted.  Although still too early to call success the situation is looking good, according to the newsletter.

The Chief Pilot for all three Phases on South Georgia (Isla Georgias del Sur)* has been the well-known Peter Garden, who is based in New Zealand.  Peter writes to ACAP with news of how he found New Zealand’s Campbell Island 13 years after he helped to rid it of its own rat population.

“This island [Campbell] was the first island that I had had the opportunity to revisit after carrying out eradication work and I was very interested in seeing, first hand, the results.

As we came ashore in Perseverance Harbour we spotted two Campbell Island Teal.  These flightless ducks had been completely exterminated on the main island by rats, only surviving in very small numbers on the offshore rock stacks.  Along with the endemic Campbell Island Snipe they have now bounced back and are happily inhabiting their former home.

Megaherbs, the gigantic perennial wildflowers that were once chewed down by rats, are now growing prolifically all over the island.

It is this sort of result that makes all the difficult flying and uncomfortable living conditions that go along with this type of work all worthwhile.”

“Seabirds are the most threatened group of marine animals; 29% of species are at some risk of extinction.  Significant threats to seabirds occur on islands where they breed, but in many cases, effective island conservation can mitigate these threats.  To guide island-based seabird conservation actions, we identified all islands with extant or extirpated populations of the 98 globally threatened seabird species, as recognized on the International Union for Conservation of Nature Red List, and quantified the presence of threatening invasive species, protected areas, and human populations.  We matched these results with island attributes to highlight feasible island conservation opportunities.  We identified 1362 threatened breeding seabird populations on 968 islands.  On 803 (83%) of these islands, we identified threatening invasive species (20%), incomplete protected area coverage (23%), or both (40%).  Most islands with threatened seabirds are amenable to island-wide conservation action because they are small (57% were <1 km2), uninhabited (74%), and occur in high- or middle-income countries (96%).  Collectively these attributes make islands with threatened seabirds a rare opportunity for effective conservation at scale.” 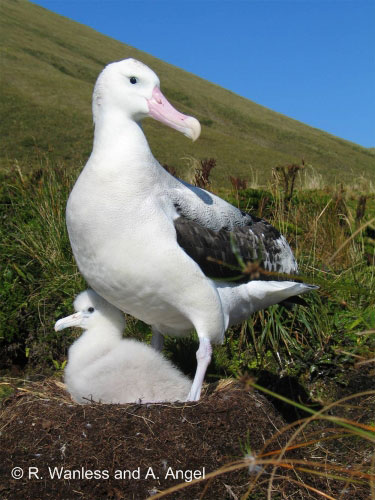 Ardley Island is situated in Maxwell Bay nearly 500 m east of the coast of the Fildes Peninsula at the south-western end of King George Island, the largest of the South Shetland Islands that lie 120 km off the Antarctic Peninsula.  Ardley Island  is connected to King George Island by an isthmus that is exposed at low tide, allowing access on foot.  It is 137 ha (2 x 1.5 km) in size and rises to a height of 65 m.

“The island … possesses some of the best developed and most extensive plant communities in the South Shetland Islands, notably the peaks, dominated by macrolichens.”  Antarctic Hair Grass Deschampsia antarctica is colonizing the island, probably reacting to climate change.

Ardley Island, showing the isthmus that connects it to King George Island

ACAP-listed Southern Giant Petrels Macronectes giganteus breed on Ardley Island in small numbers.  “German studies indicate that the giant petrel breeding population has declined by about 80% since research began in 1979.  They point to strong evidence that numerical fluctuations of these particular populations are a direct response to disturbances produced by large numbers of visitors, aircraft overflights and station constructions.”  In 1998/99 only five pairs of giant petrels were reported (click here), in contrast to the 18 pairs recorded in 1979.  However, since the last decade or so the population has stabilized, with 19 pairs reported for the most recent (2013/14) season.

Designated a Site of Special Scientific Interest (SSSI No. 33) in 1991, Ardley Island is now categorized as an Antarctic Specially Protected Area (No. 150), except for a small section of the coastline where landings by up to 20 tourists at a time are permitted.  The island’s current management plan was adopted in 2009 under the Antarctic Treaty (click here).

Entry into the ASPA is prohibited except in accordance with a permit issued by an appropriate national Authority, allowing access by small boat and on foot only.

“The Management Plan for Ardley Island aims to:

Protect the bird community and the terrestrial ecosystem;
Avoid degradation of, or substantial risk to, the values of the Area by preventing unnecessary human disturbance in the Area;
Allow scientific research, with the least possible interference, on marine Antarctic birds, and the ecosystem and physical environment associated with the values for which the Area is protected;
Allow other scientific research in the Area, provided it does not compromise the values for which the Area is protected;
Minimize the possibility of the introduction of non-native plants, animals and microbes to the Area; and
Allow visits for management purposes, and in support of the aims of the Management Plan.”

Ardley Island has been categorized as an Important Bird Area by BirdLife International  because of its population of several thousand breeding pairs of Gentoo Penguins Pygoscelis papua.

With thanks to Christina Braun, Institute of Ecology, University of Jena, Germany for information and the photographs.