Subir Sarker (Department of Physiology, Anatomy and Microbiology, La Trobe University, Melbourne, Australia) and colleagues have published open access in the journal BMC Genomics on the genome of avian pox virus from two species of shearwaters.

“Background: Over the past 20 years, many marine seabird populations have been gradually declining and the factors driving this ongoing deterioration are not always well understood. Avipoxvirus infections have been found in a wide range of bird species worldwide, however, very little is known about the disease ecology of avian poxviruses in seabirds. Here we present two novel avipoxviruses from pacific shearwaters (Ardenna spp), one from a Flesh-footed Shearwater (A. carneipes) (SWPV-1) and the other from a Wedge-tailed Shearwater (A. pacificus) (SWPV-2). Results: Epidermal pox lesions, liver, and blood samples were examined from A. carneipes and A. pacificus of breeding colonies in eastern Australia. After histopathological confirmation of the disease, PCR screening was conducted for avipoxvirus, circovirus, reticuloendotheliosis virus, and fungal agents. Two samples that were PCR positive for poxvirus were further assessed by next generation sequencing, which yielded complete Shearwaterpox virus (SWPV) genomes from A. pacificus and A. carneipes, both showing the highest degree of similarity with Canarypox virus (98% and 67%, respectively). The novel SWPV-1 complete genome from A. carneipes is missing 43 genes compared to CNPV and contains 4 predicted genes which are not found in any other poxvirus, whilst, SWPV-2 complete genome was deemed to be missing 18 genes compared to CNPV and a further 15 genes significantly fragmented as to probably cause them to be non-functional. Conclusion: These are the first avipoxvirus complete genome sequences that infect marine seabirds. In the comparison of SWPV-1 and −2 to existing avipoxvirus sequences, our results indicate that the SWPV complete genome from A. carneipes (SWPV-1) described here is not closely related to any other avipoxvirus genome isolated from avian or other natural host species, and that it likely should be considered a separate species.” 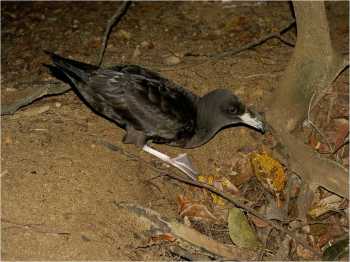