José Fernández-Costa (Instituto Español de Oceanografía, A Coruña, Spain) and colleagues submitted a document on “interactions” (=bycatch?) with seabirds by a Spanish longline fishery targeting swordfish in the Indian Ocean to the 12th Meeting of the Working Party on Ecosystems and Bycatch (WPEB12) of the Indian Ocean Tuna Commission (IOTC) held in Victoria, Mahé, Seychelles earlier this month.

“A total of 310 fishing sets (361,608 hooks) targeting swordfish in the Indian Ocean (lat ≥ 25ºS) between 2011-2015 were analyzed.  The areas included in the study are between 25º-36ºS and 34º-72ºE.  However, the interaction with seabirds was restricted to areas between 31º-36ºS and 37º-48ºE during the January-April period.  A total of 19 seabird individuals during the whole period 2011-2015, identified as belonging to seven species, interacted with the fishing operation (Diomedea exulans, Phoebetria fusca, Procellaria aequinoctialis, Thalassarche carteri, Thalassarche cauta, Thalassarche melanophris, Thalassarche salvini). Most interactions occurred in one year-months and in a single 5ºx5º square.  Interactions observed in other areas were minor or regularly null.  The overall rate of interaction estimated for areas lat ≥ 25ºS and species combined was estimated at 5.254E-05 seabird/hook.  Night setting and low levels of lighting during setting operations as well as other fishing protocols applied by the vessels were identified as the most important factors to explain the regularly low or null interaction with seabirds.

Sightings of seabirds were also made during the trips studied, most of them occurring during daytime sailing.  Procellaria aequinoctialis was identified as the most prevalent species in sightings.  Other less prevalent species were identified as Phoebetria fusca, Thalassarche carteri, Diomedea exulans, Thalassarche cauta, Pterodroma macroptera, Thalassarche salvini and very sporadically Sulidae/Laridae, Oceanites spp. and Ardena pacifica (sic).  The paper also summarizes the mitigation regulations put in place at national level for reducing the incidental bycatch of seabirds in the longline fleet in the Indian Ocean.” 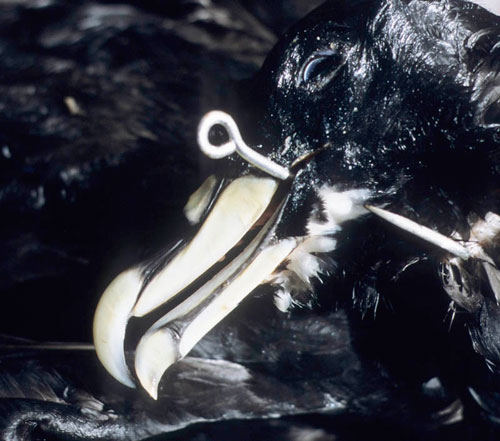