ACAP’s Fifth Session of its Meeting of Parties in the Canaries on the island of Tenerife commenced yesterday with speeches of welcome on behalf of Spain as the host country by Mr Pablo Saavedra (Director General, Coastal and Marine Sustainability (Sostenibilidad de la Costa y del Mar,  Ministerio de Agricultura, Alimentación y Medio Ambiente) and Dr Eduardo Balguerías (Director, Spanish Institute of Oceanography - Instituto Español de Oceanografía).  Director Pablo Saavedra noted that the protection of marine areas and adequate management is essential for reducing anthropogenic threats jeopardizing the conservation status of seabirds.  Dr Eduardo Balguerías recalled the early research on incidental seabird by-catch by fishing fleets operating in ​​CCAMLR jurisdiction, and the way it triggered an alarm on the real magnitude of this conservation problem. He noted that since then there has been great progress in conservation, especially in relation to the development of by-catch mitigation measures and the subsequent adoption of conservation and management measures by Regional Fisheries Management Organisations (RFMOs).

In their speeches they made mention of the Critically Endangered Balearic Shearwater Puffinus mauretanicus, endemic as a breeding bird to Spain’s Balaearic Islands and the most-recently listed ACAP species.  It was also noted that the Canary Islands support a number of breeding procellariiform species. 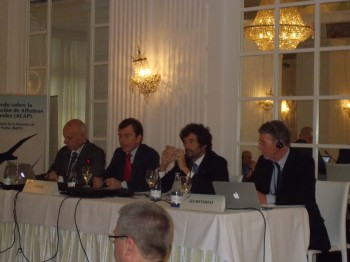 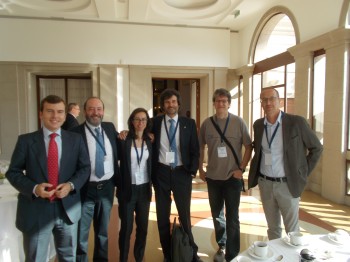 Following a break, the meeting elected Mr Ricardo Losa Giménez (Ministerio de Asuntos Exteriores y de Cooperación, Spain) as its Chair.  Dr Marco Favero, Chair of ACAP’s Advisory Committee acted as the meeting’s Vice Chair.  Following several house-keeping matters the morning’s deliberations concentrated on a system for allowing observers from member economies to attend meetings, the budget for the next triennium and the scale of contributions that are made by Parties to the Agreement.

In the afternoon, the Session welcomed news from Namibia and the USA, present at MoP5 as observers, that progress was being achieved in both their respective countries to becoming Parties to the Agreement, with the possibility this might happen in the near future.

The day closed with Spain hosting the welcoming dinner in El Bulán, a local restaurant.