Lyndon Perriman, Department of Conservation Head Ranger at New Zealand’s Taiaroa Head, has made another interesting report on goings on in the mainland Northern Royal Albatross Diomedea sanfordi colony, this time on the fate of a bird whose body was previously spotted below the colony.  His Facebook report, with minor editing, follows.

Yesterday we received the body of the dead albatross [see here] from the bottom of the cliff.  She was banded GOR, a 36-year old.  Her wing bone had snapped apart indicating a severe hit from the cliff or impact with the rocks below.

GOR and her partner had fledged eight chicks from their 11 breeding attempts (spread over an 18-year period as they are a biennial breeding species).  Four of those chicks are old enough to have spent enough time at sea to return at around four or five years and all four are breeding this season. The three other chicks are yet to return.

This pair last bred in the 2014/15 season.  However, her mate failed to return from sea at around March 2015 when their chick was still young and small.  We had no foster nests to foster that chick to other parents so we ended up playing what we term "musical chick" moving chicks between their nest (where GOR was present) and two other nests (containing the two oldest chicks).  At the same time we supplementary-fed GOR, so that with food in her stomach she would stay at the nest.

We needed to do this as GOR had no food left to feed her chick and if she left the nest to go to sea to feed, her young chick would not survive the night alone.

Each day we would move chick 1 to nest 2, move chick 2 to nest 3 and move chick 3 to nest 1 (and move them to the next nest in the following day, leaving one of the older chicks always at GOR's nest overnight so that if GOR did leave, the older chick probably would survive alone overnight).  We can only do this chick rotation during the first one to two months when parents will readily accept any young chick we place in their nest (they will not go to other nests and feed other chicks, but are fixated on their own nest and therefore look after whoever is in their nest.  After a few months they can recognise their own chick and won't feed nearby chicks).

Our supplementary food is pretty good, but not as good as food from the adult, so by exchanging chicks between three nests it meant that the poorer-quality food we gave GOR wouldn't just be fed to her chick alone, thus avoiding potential problems of that chick caused  by a nutrient deficiency.

With three chicks that look very much alike, and a semi-complicated process of moving chicks once or twice a day it was a bit of a headache for staff arriving each day and working out which nest had which chick and where it had to go to for the day or for part of the day.
But the good news was that after a couple of weeks GOR's chick was large enough to survive time alone and GOR naturally entered the post-guard stage (where in a normal situation both parents leave the nest to go to sea to find food for the chick, returning to feed the chick over the next six to seven months until it fledges).

With GOR now in the post-guard stage, and the other two chicks returned to their parents, it would take both parents to raise one chick.  So over the next seven months we supplementary-fed the chick when GOR was out at sea finding food for her chick.  Feeding four times a week, it was a very long seven months, but it did mean that both the chick and GOR survived.

Like all other Northern Royal Albatrosses after fledging a chick the adults take the next 12 months off (the 2015/16 season for GOR was spent out at sea) before returning to attempt to breed again. However, if she had not accidentally hit the cliff, it would have been another three or so years before GOR would have found another mate, formed a strong pair bond and started to breed once more. 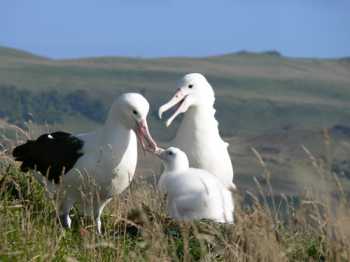 View a video clip and read more on the current breeding season here.