Drones (unmanned aerial vehicles or UAVs) equipped with cameras offer a new and convenient way of surveying colonially-breeding seabirds with less disturbance and more accuracy than by conducting ground counts (click here for an example of their use).

However, flying drones above seabirds (and other wildlife) poses conservation issues.  What minimum height should be used to avoid disturbance from the sight or sound of a moving object overhead?  Also what should be done to reduce the risk of mid-air collisions with flying birds with possible mortalities– and damage to the drone itself?  In addition to the requirement for a code of practice for the use of drones in research and monitoring there is a need to control the use of drones for purely recreational purposes over or near seabird colonies, most especially those that support threatened species.

Most ACAP-listed albatross and petrels breed on uninhabited islands so disturbance caused by recreational drones (most small remotely controlled quadcopters) seems likely to be uncommon.  But colonies of surface-nesting albatrosses close to human populations (such as on the Hawaiian islands of Kauai and Oahu and on South Island, New Zealand) may be at risk - as shown by a recent example from Taiaroa Head in New Zealand where Northern Royal Albatrosses Diomedea sanfordi breed when a drone was found crash landed within five metres of an albatross nest site. 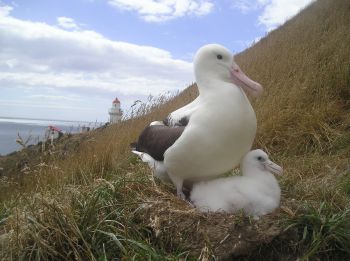 “The Department of Conservation [DOC] are concerned about drones being flown over the royal albatross colony at Taiaroa Head after one crashed there last week.  DOC said the drone crash came as the number of tourists and locals using drones at the colony of the endangered bird had increased over the last year.  The crashed drone, a white and silver DJI Phantom 3 advanced model, was found undamaged within the colony on Thursday last week by DOC ranger Lyndon Perriman.  In the second incident within a week, Mr Perriman spoke to the owner of a drone being flown around the car park beside the Albatross Centre.

As a result the Otago Peninsula Trust had erected temporary signs in the car park saying drones were not allowed in the area, with permanent signs will be erected soon”. 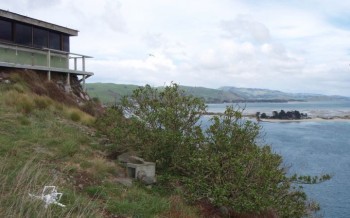 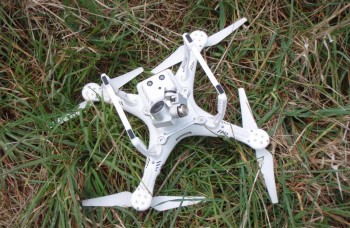 All aircraft, including drones, are restricted from using the airspace above the Taiaroa Head albatross colony, a nature reserve with public entry by permit only, as they could disturb wildlife and be a hazard to visitors.  Recreational and commercial use of drones on or over public conservation land and waters of New Zealand requires authorisation from DOC; drone operators are also required to abide by Civil Aviation rules, including not operating in restricted airspace.  Breaching of regulations could lead to prison sentences of up to two years and fines of up to NZ$100 000.