Graham Parker (Parker Conservation, Dunedin, New Zealand) and colleagues have published in the journal Polar Biology on aspects of the biology of the House Mouse Mus musculus (now possibly eradicated) on South Georgia (Islas Georgias del Sur)*.  At low densities, unlike at some other Southern Ocean islands (click here) the mice did not seem to affect deleteriously burrowing petrels, including the ACAP-listed and Vulnerable White-chinned Petrel Procellaria aequinoctialis.

“South Georgia has been the southernmost location where populations of invasive house mice Mus musculus are found.  The distribution of mice was investigated at Cape Rosa and the Nuñez Peninsula, the two areas of South Georgia where the species is known to occur.  Live-trapping and kill-trapping took place during March 2012, at the end of the austral summer, with traps in four grids (3.2–4.0 ha in area) and on 34 trap lines distributed across a range of habitats from the shoreline to 250 m above sea level.  Mice were scarce, with just 68 captures in about 1750 trap nights.  Mouse densities in tussock habitat were estimated at 2.1–2.8 mice/ha, with higher densities of 5.3–6.4 mice/ha along the coastline. Mice were found in all habitats apart from higher-altitude fellfield, but were relatively less abundant in tussock habitat with large numbers of seals.  Mice were breeding at both sites with 58 % of mature females pregnant or lactating.  Litter size (7.1 ± 2.3 embryos) and adult body mass (21.4 ± 4.6 g) were typical of most other island mice populations.  Population densities of mice on South Georgia are two orders of magnitude lower than mouse densities measured at other sub-Antarctic islands.  The very low population density and its restricted distribution, with most captures close to the shore, and the presence of large numbers of burrowing petrels and South Georgia pipits Anthus antarcticus at both sites, suggest that mice have a relatively limited impact on South Georgia’s vertebrate biodiversity.” 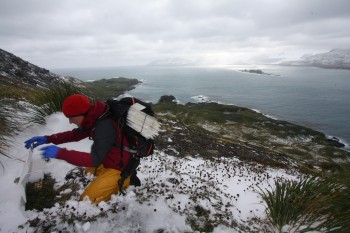 Graham Parker holds up one of the few House Mice caught

With thanks to Graham Parker for information and photographs.