Rémi Fay (Centre d'Etudes Biologiques de Chizé, Villiers-en-Bois, France) and colleagues have published in the Journal of Animal Ecology on the demography of Wandering Albatrosses Diomedea exulans in their first few years of life.

“1. Our understanding of demographic processes is mainly based on analyses of traits from the adult component of populations.  Early-life demographic traits are poorly known mainly for methodological reasons.  Yet, survival of juvenile and immature individuals is critical for the recruitment into the population and thus for the whole population dynamic, especially for long-lived species.  This bias currently restrains our ability to fully understand population dynamic of long-lived species and life history theory.

2. The goal of this study was to estimate the early-life demographic parameters of a long-lived species with a long immature period (9-10 years), to test for sex and age effects on these parameters, and to identify the environmental factors encountered during the period of immaturity that may influence survival and recruitment.

3. Using capture-mark-recapture multi-event models allowing us to deal with uncertain and unobservable individual states, we analysed a long-term data set of wandering albatrosses to estimate both age and sex specific early-life survival and recruitment.  We investigated environmental factors potentially driving these demographic traits using climatic and fisheries covariates and tested for density dependence.

4. Our study provides for the first time an estimate of annual survival during the first two years at sea for an albatross species (0.801±0.014).  Both age and sex affected early-life survival and recruitment processes of this long-lived seabird species. Early-life survival and recruitment were highly variable across years although the sensitivity of young birds to environmental variability decreased with age.  Early-life survival was negatively associated with sea surface temperature and recruitment rate was positively related to both Southern Annular Mode and sea surface temperature.  We found strong evidence for density dependence mortality of juveniles.  Population size explained 41% of the variation of this parameter over the study period.

5. These results indicate that early-life survival and recruitment were strongly age and sex-dependent in a dimorphic long-lived species.  In addition, early life demographic parameters were affected by natal environmental conditions and by environmental conditions faced during the period of immaturity.  Finally, our results constitute one of the first demonstrations of density dependence on juvenile survival in seabirds, with major consequences for our understanding of population dynamics in seabirds.” 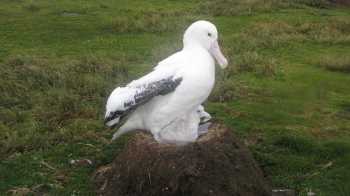