Avaunt yee mice of Auckland! Working towards a summer bait drop in the New Zealand sub-Antarctic

“Auckland Island is the last of the New Zealand subantarctic islands to have introduced mammals, including pigs (Sus scrofa), cats (Felis catus) and mice (Mus musculus), and its large size makes mouse eradication logistically challenging.  Therefore, it has been suggested that a lower bait sowing rate than is typically used for island rodent eradications should be applied and that eradication should be undertaken during summer, despite this being the rodent breeding season and alternative food being more readily available . In February 2019, we evaluated the effectiveness of this proposal by applying 4 kg/ha of non-toxic cereal bait containing the fluorescent dye pyranine across Falla Peninsula, Auckland Island, and trapping mice for 7 days using 13 live and kill trapping grids to determine their population status, density, home range size and bait uptake.  In addition, bait availability was concurrently monitored along 30 transects.  Mice were initially neophobic towards the trapping devices and thereafter were captured at low rates across both trap types.  Mouse density varied greatly across the grids (range = 26.4–105.6 mice/ha) and was independent of habitat type, and the home range radius of mice was estimated to be 34 m, although this was based on only one grid in coastal forest, where there was a medium density of mice.  Bait was still available on the ground in a potentially palatable condition at a density of > 1.2 kg/ha at 9 nights after bait application.  Only 2 of 232 mice (< 1%) that were caught within the treatment area showed no evidence of consuming bait, both of which were very small juveniles caught in tussock grassland.  Therefore, we believe they would have been vulnerable to a second application of bait approximately 4 weeks later once they were mature.” 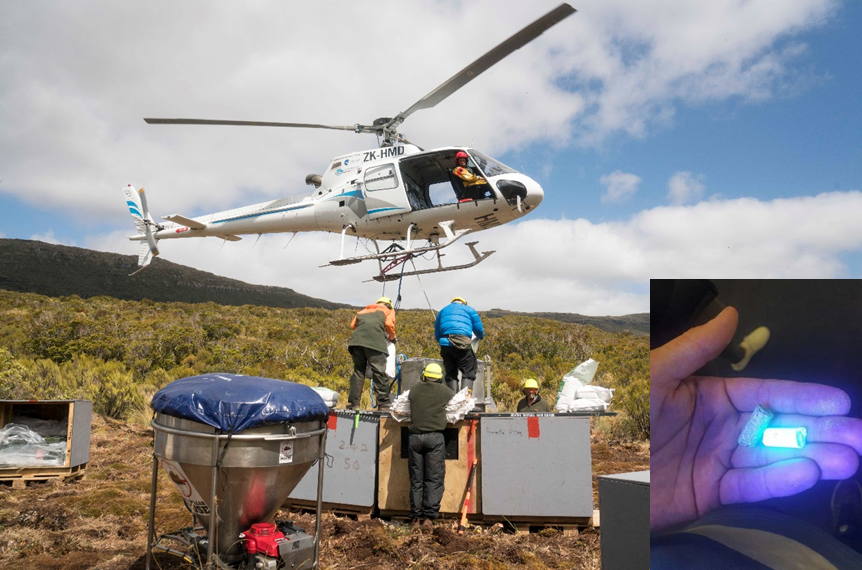 Check outr a "story map" on the whole of the summer field work: looks positive for an eradication to go ahead!