Burrowing petrels typically fly to and from, and their chicks fledge from, their breeding sites at night, presumably so as to avoid predators as they pass over land to and from the sea.  In inhabited areas where outside artificial lighting at night prevails, such birds can be dazzled by, or even attracted to, artificial lights, leading to collisions with buildings and vehicles on roads, “downings”, fatal injuries and enhanced risk of capture by predators, such, as in the southern hemisphere, by skuas.

Conservation efforts at a number of breeding sites world-wide have concentrated on both collecting downed fledglings, notably of shearwaters Puffinus and Calonectris and gadfly petrels Pterodroma, for later release to sea and reducing the numbers and strength of artificial lights. 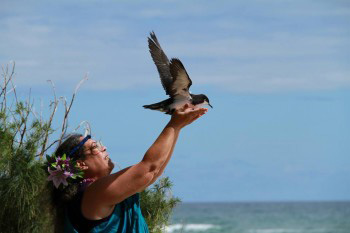 A downed Newell's Shearwater fledgling is released after rescue

At one locality, the Barking Sands Pacific Missile Range Facility (PMRF) on the USA’s Hawaiian island of Kauai, green lights have been tried with success, leading to a reduced number of downed birds being recorded.  “The 2013 fledging season for Newell’s shearwater [Puffinus newelli] and Hawaiian Petrels [Pterodroma sandwichensis] ended … with zero injuries or casualties at the base”.

“While none of last year’s incidents resulted in fatalities, all were attributed to high-wattage light sources, which were immediately switched, according to PMRF.  Those physical changes include the implementation of a “Dark Sky” program, which improved lighting conditions so the birds would be less distracted.  Conventional lamps were converted to LEDs, and full-cut-off fixtures prevent the light source from being seen by the birds from above.  Another technology being utilized at the base are “green lights,” a spectrum first tested [in] 2010, which seems to also work in the birds’ favour” (click here).

Green lights have also been installed on the other side of the World at South Africa’s weather and research station on sub-Antarctic Marion Island.  A strict policy of no outside lights, closing of black-out blinds at dusk and switching off unnecessary inside lights has led to the incidence of locally-known “night bird attacks” by burrowing petrels, most especially the abundant Salvin’s Prion Pachyptila salvini, being reduced over the years.

Sky corridors from the outside

Sky corridor during the day

A sky corridor at night with its green footlights just discernable

Photographs of the corridor by Mariette Wheeler

The construction of a new base at Marion in the last decade gave the opportunity to install low-wattage green footlights to guide inhabitants in safety along glassed “sky corridors” between buildings at night.  Although experimental evidence is lacking it seems that the green lights are playing their part in reducing bird strikes and subsequent mortality of burrowing petrels when they fly close to the buildings on moonless and foggy nights.

With thanks to Mariette Wheeler for the photographs.