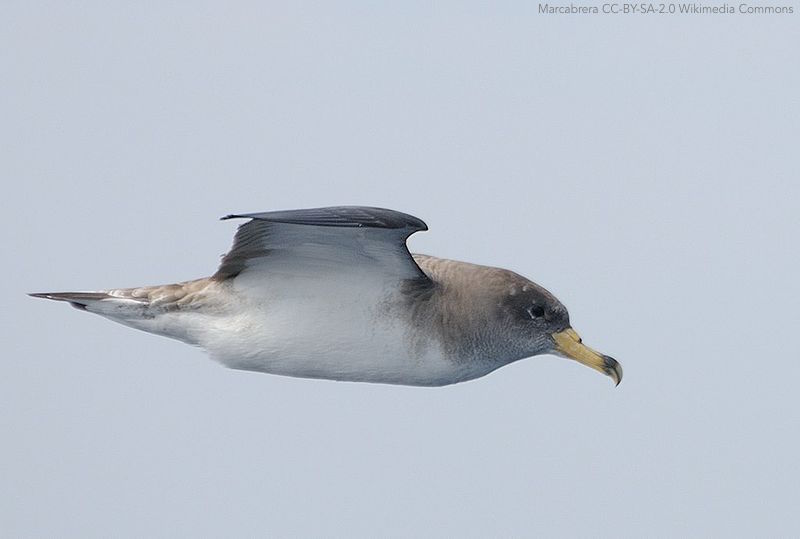 Raül Ramos (Institute for Research on Biodiversity (IRBIO) Universitat de Barcelona, Barcelona, Spain) and colleagues have published in the journal Ecological Indicators on the presumed stability in trophic level over time in Cory’s Shearwaters Calonectris borealis based on feather analysis.

“Despite its importance for ecology and conservation, we are still far from understanding how environmental variability interacts with intrinsic factors and individual specialization to determine trophic strategies of long-lived taxa, mostly due to difficulties in studying the same animals over extended periods. Here, by yearly consistently sampling the first primary feather of 99 Cory’s shearwaters (Calonectris borealis) foraging in the Canary Current (CC) upwelling ecosystem, we provide robust evidence on the individual changes of isotopic ratios of carbon (δ13C) and nitrogen (δ15N) over 17 years. We reported a slight longitudinal decline of δ13C values throughout 2001–2017, even after being adjusted for the marine Suess effect (linked to the increasing CO2 emissions). Although CC is often considered to be overexploited by industrial fisheries, we could not detect a decline in Cory’s shearwater trophic level indicating a change in the trophic web structuring, as revealed by δ15N. We found negative correlations of δ13C and δ15N with the CC upwelling intensity, indicating annual variability in baseline isotopic levels propagates through the food chain and it integrates in predators’ tissues. Low individual repeatabilities among years at population level indicates low long-term specialization, suggesting long-lived individuals foraging on highly productive areas can adjust their foraging strategies and diet according to environmental variability. However, individual-level repeatabilities in isotopic values showed a range of individual specialization within the population, indicating most individuals are generalist and a few of them highly specialized. First, although we found a clear influence of the upwelling intensity on the trophic ecology of birds, we could not detect any temporal trend in the trophic level of the Cory’s shearwater population, suggesting a stability in the structure of the pelagic food web of the CC over the last two decades despite the fishing pressure. Second, the existence of individual specialization highlights the importance of considering the repeated sampling of individuals to detect small changes in the trophic ecology of a population. Finally, the coexistence of individuals with different degree of specialization (from extremely flexible [generalists] to highly consistent individuals [specialists]) within a population can have deep implications on the capacity of populations to cope with environmental change.”