Where do Black-browed Albatrosses and Sooty Shearwaters go to on the Patagonian Shelf?

“The Patagonian Shelf Large Marine Ecosystem supports high levels of biodiversity and endemism and is one of the most productive marine ecosystems in the world.  Despite the important role marine predators play in structuring the ecosystems, areas of high diversity where multiple predators congregate remains poorly known on the Patagonian Shelf. Here, we used biotelemetry and biologging tags to track the movements of six seabird species and three pinniped species breeding at the Falkland Islands.  Using Generalized Additive Models, we then modelled these animals’ use of space as functions of dynamic and static environmental indices that described their habitat. Based on these models, we mapped the predicted distribution of animals from both sampled and unsampled colonies and thereby identified areas where multiple species were likely to overlap at sea. Maximum foraging trip distance ranged from 79 to 1,325 km. However, most of the 1,891 foraging trips by 686 animals were restricted to the Patagonian Shelf and shelf slope, which highlighted a preference for these habitats. Of the seven candidate explanatory covariates used to predict distribution, distance from the colony was retained in models for all species and negatively affected the probability of occurrence.  Predicted overlap among species was highest on the Patagonian Shelf around the Falkland Islands and the Burdwood Bank.  The predicted area of overlap is consistent with areas that are also important habitat for marine predators migrating from distant breeding locations.  Our findings provide comprehensive multi-species predictions for some of the largest marine predator populations on the Patagonian Shelf, which will contribute to future marine spatial planning initiatives. Crucially, our findings highlight that spatially explicit conservation measures are likely to benefit multiple species, while threats are likely to impact multiple species.” 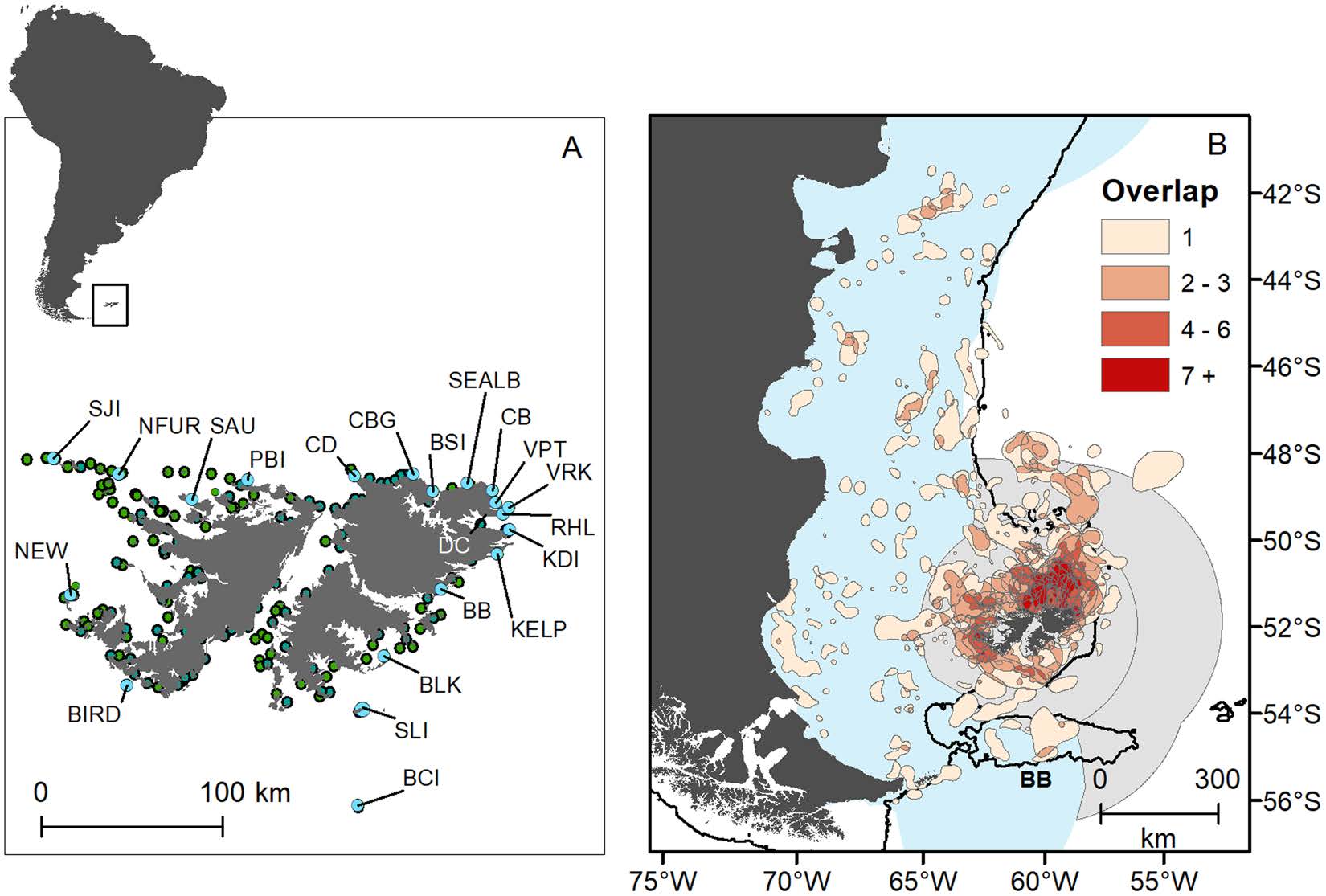 Panel (B) = important areas identified by overlap of 50% utilization distributions.
(adapted from the publication)

With thanks to Megan Tierney.