Review: Guide to Seabirds of Southern Africa by Peter Ryan

Southern Africa, generally well covered by books on particular groups of birds, now has a seabird book to fill a notable gap and join the existing books on game birds, water birds and raptors.  Guide to Seabirds of Southern Africa by Peter Ryan, published by Struik Nature last month, covers 132 seabird species, including vagrants but also 12 breeding endemics, which occur in southern Africa (primarily Namibia and South Africa) and in the Southern Ocean and its oceanic islands south of Africa. 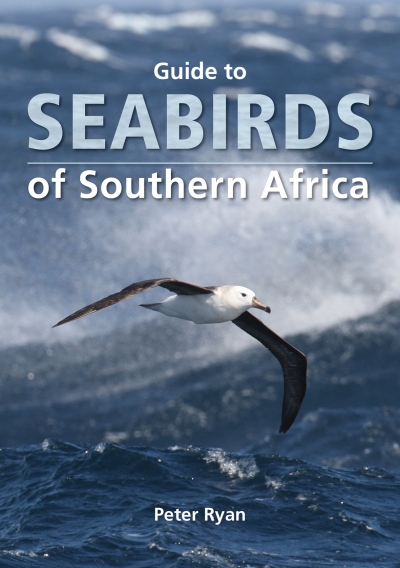 This book is primarily an identification guide, with each species illustrated with colour photos and a thumb-nail distribution map.  As well as a description and advice on how to identify them, the species’ texts cover status and biology.  Species have anything from two to 11 (mainly three to five) photos showing birds in flight and at rest; photos, mostly by the author, are quite small, but nearly all of them are sharp and well exposed.  For some species (e.g. Wandering Albatross Diomedea exulans and Kelp Gull Larus dominicanus) plumage changes with age are illustrated. These accounts are supported by up to two pages describing each taxonomic group (mainly families).  A detailed introduction covers such subjects as the Ocean environment, Making a living, Seabirds on the move, Raising a family, Seabird conservation, Watching seabirds and How to use this book.

Procellariiform tubenoses form the bulk of the book.  Of the 31 species listed by the Agreement on the Conservation of Albatrosses and Petrels (ACAP), Peter Ryan’s guide includes 17 albatross taxa (unlike ACAP’s treatment, the White-capped Thalassarche steadi is regarded as a subspecies of the Shy T. cauta), five species of petrels and the Northern Hemisphere’s Balearic Shearwater Puffinus mauretanicus - over two thirds of the ACAP total.  And who would have guessed that as many as 10 other species of penguins have been recorded in the region in addition to the southern African endemic and globally Endangered African Penguin Spheniscus demersus (there are only 18 world-wide)?

The book is nicely up to date.  For example the recent (and unexpected) discoveries made by Peter and his colleagues of Blue Petrel Halobaena caerulea and Macgillivray’s Prion Pachyptila macgillivrayi breeding on Gough Island in the South Atlantic are each given full treatment.  The latest findings on the taxonomic status of the shearwater group is taken into account, with the genus Ardenna adopted for four species.  The confusing situation with a white-bellied morph of the Black-bellied Storm Petrel Fregetta tropica that breeds in the Tristan da Cunha group alongside the White-bellied Storm Petrel F. grallaria, worked out by the author, is also given coverage with a photo pair to compare subtle differences.

Always tricky with a seabird book: which marine-frequenting species to cover, which to leave out?  There is no firm rule on this one.  The guide includes a few marginal seabirds, for example Reed Cormorant Phalacrocorax africanus, Grey-headed Gull Larus cirrocephalus and Whiskered Tern Chlidonias hybrida, which are all pretty much shorebirds at best along most of the southern African coast.  In contrast, Black-necked Grebe Podiceps nigricollis and Great White Pelican Pelecanus onocrotalus are not included, although they do occur at sea reasonably regularly in a few sheltered inshore areas within southern Africa, notably off the Namibian coast.

Professor Peter Ryan, Director of the well-known Percy FitzPatrick Institute of African Ornithology at the University of Cape Town, was awarded A-rating scientist status by South Africa’s National Research Foundation last December. This is the highest accolade in the NRF’s rating system to rank researchers in the country and recognizes an international leader in the field.  Peter is the first A-rated ornithologist in South Africa and one of the few A-rated scientists who have worked within the South African National Antarctic Programme (SANAP) (click here).

Largely due to the Fitztitute’s impressive output of research articles in top-tier international journals under Peter’s leadership, the Centre for World University Rankings has this month placed the University of Cape Town joint third in Ornithology out of over 26 000 higher-education institutions assessed (click here).  Looking good for the Institute where I spent the larger part of my ornithological career.

Later this month, the NGO BirdLife South Africa will hold its Annual General Meeting among seabirds on a five-day cruise into the Southern Ocean on the liner MSC Sinfonia (with so far 1907 birders booked into 924 cabins!)  Peter will be aboard as one of the expert guides, and I imagine several hundred copies of his excellent and practically error-free new book will be aboard as well.

Lastly, and on a personal note, I was greatly touched to read that Peter has dedicated his seabird book to myself.  Seems my taking him, first as a schoolboy then as an undergraduate, on outings and field trips to study seabirds on southern Africa’s coasts and guano islands back in the 1980s has paid off handsomely!  He has been a valued friend and colleague ever since.