The 22nd Meeting of the Extended Commission for the Conservation of Southern Bluefin Tuna (CCSBT) was held last week from 12-15 October in Yeosu, South Korea.  The Agreement was represented at the meeting by its Executive Secretary, Warren Papworth (click here).

Three items of considerable importance to the work of the Agreement were discussed at the Yesou meeting.  The first was the adoption of a Memorandum of Understanding (MoU) between the two organisations.  The objective of the MoU is to facilitate cooperation between the CCSBT and ACAP Secretariats with a view to supporting efforts to minimise the incidental by-catch of albatrosses and petrels listed in Annex 1 of the Agreement caused by fishing for Southern Bluefin Tuna Thunnus maccoyii (SBT).  The Extended Commission noted the valuable contributions of ACAP to the work of the CCSBT and approved the signing of the MoU. 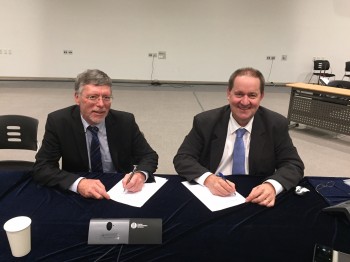 The second item was the proposal from Australia for a binding Resolution to mitigate the impact on seabirds of fishing for Southern Bluefin Tuna.  The CCSBT currently has a non-binding requirement for its Members to follow the conservation measures for ecologically related species (ERS) adopted by other tuna Regional Fisheries Management Organizations (tRFMOs).  It was noted by some CCSBT Members that the CCSBT is the only tuna RFMO without a comprehensive set of binding measures to mitigate the impacts of fishing on seabirds.

All CCSBT Members expressed concern about their fisheries interactions with ecologically related species and expressed their wish to see reductions in the level of these interactions.  There was general support for the Australian proposal with the exception of one Member, which had several concerns with it.  Consensus could not be reached on the Australian proposal and it therefore was not adopted.

a) develop, document and implement rules, operating systems, and processes to meet their CCSBT obligations; and

b) report on the effectiveness of the rules, operating systems, and processes to the Commission through the Compliance Committee.

This mechanism will enable the Compliance Committee to review compliance of SBT vessels with ERS conservation requirements and for the outcome of these reviews to be considered in the Commission's Performance Review process.

The adoption of the MoU and the MPRs by the CCSBT Extended Commission are welcome developments and will allow further strengthening of the Commission's ability to reduce interactions with ecologically related species in the Southern Bluefin Tuna fishery.