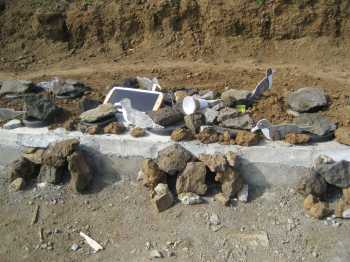 Artificial burrows for Cory's Shearwaters with decoys and a solar-powered sound system on Corvo, Azores, photograph by Steffen Oppel

“Seabirds are one of the avian groups facing the fastest and highest decline in population numbers around the world, suffering from many threats not only at sea but also on land.  For burrow-nesting seabirds, the loss of adequate breeding habitat, human disturbance and competition with other species make the availability of adequate nesting burrows a limiting factor for the recovery of breeding numbers.  Artificial nest provisioning has been broadly used as a measure to invert population declines, by increasing the availability of higher quality nests. Berlengas Archipelago holds an important breeding population of Cory’s Shearwater Calonectris borealis, mainly concentrated in two different sites, Farilhão Grande Islet and Berlenga Island.  On Berlenga Island, artificial nests have been provided since the late 1980’s.  In this study, we present the results of artificial nest provisioning as a conservation measure implemented over almost 30 years and its effectiveness in inverting a negative population trend found in Farilhão Grande Islet.  We also present up-to-date data on the population size and breeding parameters of Cory´s Shearwater nesting in Berlengas Archipelago.  Breeding success was found to be higher in artificial nests (0.86 ± 0.05) than in natural nests (0.77 ± 0.12). Occupation rate for artificial nests built after 2015 increased along the first 4 years after installation, resulting in an annual growth rate of 9%.  In 2015, 32-34% of the Cory’s Shearwater population was breeding in artificial nests.  A total of 681 active nests were counted along the entire archipelago in 2015, with an estimate of 800 – 975 breeding pairs. In Farilhão Grande, breeding success was particularly low and the breeding population showed a significant negative trend (annual growth rate of -2% since 2005).  However, demographic modelling indicates that a decrease on productivity by itself may not explain the observed negative population growth, and that other factors (e.g., adult survival) may be driving the negative trend. The identification of demographic par9ameters responsible for such changes will provide relevant information for conservation managers and authorities on the proper solutions to put in place. Artificial nests were shown to be an effective conservation measure for Cory’s Shearwater on Berlenga Island, and may thus contribute to the increase of breeding success and of the breeding population size at Farilhão Grande islet.” 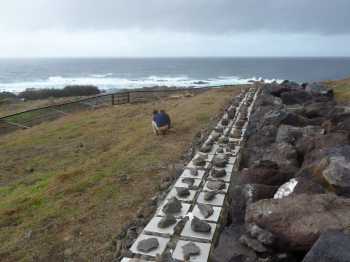 The Cory's Shearwater 'hotel', and the anti-predator fence on Corvo in the Azores, photograph by Steffen Oppel