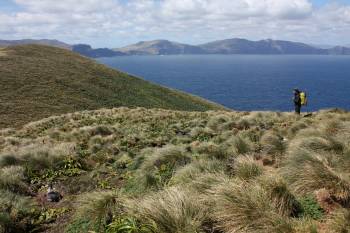 Graham Parker (Parker Conservation, Dunedin, New Zealand) and colleagues have published in the journal Notornis on the population size of Northern Giant Petrels Macronectes halli on the sub-Antarctic Auckland Islands.

“This first breeding population estimate of northern giant petrels (Macronectes halli) in the Auckland Islands group involved whole-island censuses, apart from the main Auckland Island, in the 2015-16 breeding season, and multi-year repeat visits to a subset of island colonies.  Parallel line-transects in giant petrel habitat were used to survey the number and spatial distribution of pre-fledging chicks.  The Auckland Islands 2015-16 whole-island census resulted in a count of 216 northern giant petrel chicks on eight of the 15 islands in the group.  Applying a simple correction factor, the breeding population in 2015 is estimated as c. 340 breeding pairs (range 310–390).  This estimate is higher than historical non-quantitative records of 50–200 breeding pairs.  Multi-year counts on Enderby, Rose, Frenchs, Ocean, Disappointment, and Adams Islands showed some inter-annual variability, but other island colonies remained more stable.  The northern giant petrel colony on Enderby Island has increased from two chicks in 1988 to 96–123 chicks in 2015–18 (four annual counts undertaken).”

This publication forms part of a compilation of 19 papers appearing in a special issue of the journal Notornis of Birds New Zealand that covers many aspects of the avifauna of the Auckland Islands. The special issue is also being made available as a 436-page book with the title Lost Gold: Ornithology of the subantarctic Auckland Islands.  Edited by Colin Miskelly and Craig Symes, it can be ordered for purchase (click here).  An interview with the two editors gives information about their work with the book. Click here to access abstracts for all 19 papers.

With thanks to Graham Parker and Kalinka Rexer-Huber, Parker Conservation.