“Almost all of the world’s fisheries overlap spatially and temporally with foraging seabirds, with impacts that range from food supplementation (through scavenging behind vessels), to resource competition and incidental mortality. The nature and extent of interactions between seabirds and fisheries vary, as does the level and efficacy of management and mitigation. Seabird dietary studies provide information on prey diversity and often identify species that are also caught in fisheries, providing evidence of linkages which can be used to improve ecosystem based management of fisheries. However, species identification of fish can be difficult with conventional dietary techniques. The black-browed albatross (Thalassarche melanophris) has a circumpolar distribution and has suffered major population declines due primarily to incidental mortality in fisheries. We use DNA metabarcoding of black-browed albatross scats to investigate their fish prey during the breeding season at six sites across their range, over two seasons. We identify the spatial and temporal diversity of fish in their diets and overlaps with fisheries operating in adjacent waters. Across all sites, 51 fish species from 33 families were identified, with 23 species contributing >10% of the proportion of samples or sequences at any site. There was extensive geographic variation but little inter-annual variability in fish species consumed. Several fish species that are not easily accessible to albatross, but are commercially harvested or by-caught, were detected in the albatross diet during the breeding season. This was particularly evident at the Falkland Islands and Iles Kerguelen where higher fishery catch amounts (or discard amounts where known) corresponded to higher occurrence of these species in diet samples. This study indicates ongoing interactions with fisheries through consumption of fishery discards, increasing the risk of seabird mortality. Breeding success was higher at sites where fisheries discards were detected in the diet, highlighting the need to minimise discarding to reduce impacts on the ecosystem. DNA metabarcoding provides a valuable non-invasive tool for assessing the fish prey of seabirds across broad geographic ranges. This provides an avenue for fishery resource managers to assess compliance of fisheries with discard policies and the level of interaction with scavenging seabirds.” 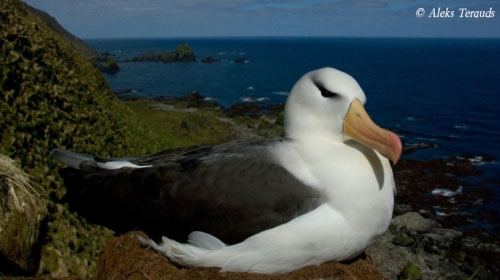