Two Australian trawl fisheries have from this month adopted the use of bafflers to reduce seabird strikes on the warps and associated mortality. 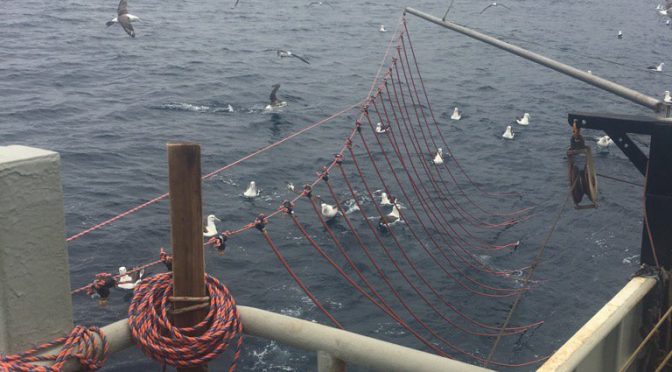 “All commercial trawl fishing vessels in the SESSF must use either sprayers, bird bafflers, or pinkies (large buoys that are placed in front of where trawl warps enter the water).  If pinkies are used, fishers must not dispose of any offal while fishing.  Bird Bafflers have proven to be the go-to device by the southern trawl fleet, with the majority of operators investing in and installing the device. Bafflers are designed to prevent seabirds from entering the ‘danger zone’ where trawl warps enter the water. They are made from long curtains of rope and pieces of plastic piping, which act as a fence and stop seabirds from coming near these warps.”

Seabird sprayers create a curtain of water around the area where the warps enter the water. In trials conducted in New Zealand bafflers reduced warp strikes by 96% and sprayers by 92%.  Use of pinkie buoys requires no offal discharge, but only reduce strikes by 75%.  So far, in the southern fishery 27 vessels have adopted the use of bafflers and only one each the more expensive sprinkler system and the use of pinkies.