“This study is the first to utilize 30-cm resolution imagery from the WorldView-3 (WV-3) satellite to count wildlife directly. We test the accuracy of the satellite method for directly counting individuals at a well-studied colony of Wandering Albatross Diomedea exulans at South Georgia, and then apply it to the closely related Northern Royal Albatross Diomedea sanfordi, which is near-endemic to the Chatham Islands and of unknown recent population status due to the remoteness and limited accessibility of the colonies. At South Georgia, satellite-based counts were comparable to ground-based counts of Wandering Albatross nests, with a slight over-estimation due to the presence of nonbreeding birds. In the Chatham Islands, satellite-based counts of Northern Royal Albatross in the 2015/2016 season were similar to ground-based counts undertaken on the Forty-Fours islands in 2009/2010, but much lower than ground-based counts undertaken on The Sisters islands in 2009/2010, which is of major conservation concern for this endangered albatross species. We conclude that the ground-breaking resolution of the newly available WV-3 satellite will provide a step change in our ability to count albatrosses and other large birds directly from space without disturbance, at potentially lower cost and with minimal logistical effort.” 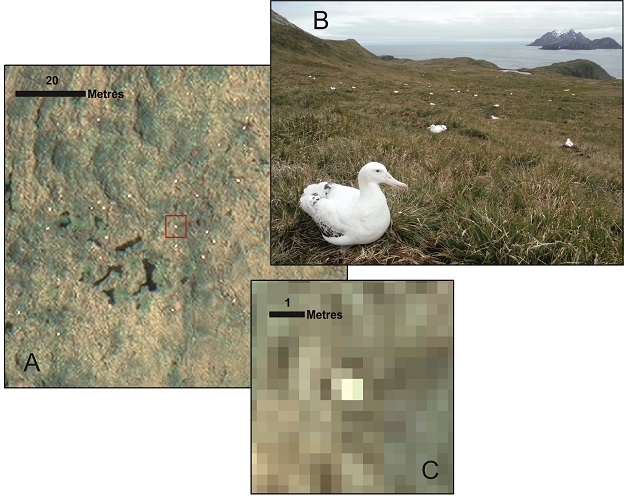 (A) Part of the WorldView-3 satellite image of Bird Island showing the distribution of white dots; (B) photograph of Bird Island for comparison; (C) close-up of a representative white dot in (a), indicating pixel composition

Read more here and watch a video about the study here.

With thanks to Barry Baker and Richard Phillips for information and photographs.