Crossing the Tasman Sea: the Fluttering Shearwater gets studied at the nest and tracked from New Zealand to Australia

“The fluttering shearwater (Puffinus gavia) is an abundant seabird endemic to breeding colonies in northern and central New Zealand. The species remains poorly studied, and here we present the first study to examine its breeding biology in detail.  Fluttering shearwater nests were monitored daily from laying in September 2015 to fledging in January 2016 on Burgess Island (Mokohinau Islands group) in the outer Hauraki Gulf, northern New Zealand. Burrows were generally simple and non-branched. Eggs were laid over a period of 39 days with laying peaking 12th September. Incubation was 50 ± 3.7 days and chicks fledged after an average of 74 ± 4.3 days, from late December to the end of January. Chick development corresponds to the pattern observed for other Procellariiformes, gaining body mass rapidly to a maximum of 115% of adult mass, and then losing weight until fledging. Chicks were fed most nights throughout chick-rearing, indicating adult birds have access to a stable food supply close to the colony. Breeding success was 63.8% and similar to other Puffinus species. This study provides baseline biological data for a poorly studied, yet common, New Zealand endemics seabird. The obtained new information will allow for further ecological investigations and improved conservation management for the species. ”

“We present the first study of the year-round distribution, activity patterns, and habitat use of one of New Zealand’s most common seabirds, the fluttering shearwater (Puffinus gavia). Seven individuals from Burgess Island and one individual from Long Island were successfully tracked with combined light-saltwater immersion loggers for one to three years. Our tracking data confirms that fluttering shearwaters employ different overwintering dispersal strategies, where three out of eight individuals, for at least one of the three years that they were being tracked, crossed the Tasman Sea to forage over coastal waters along eastern Tasmania and southeastern Australia. Resident birds stayed confined to productive waters of northern and central New Zealand year-round. Although birds frequently foraged over pelagic shelf waters, the majority of tracking locations were found over shallow waters close to the coast. All birds foraged predominantly in daylight and frequently visited the colony at night throughout the year. We found no significant inter-seasonal differences in the activity patterns, or between migratory and resident individuals. Although further studies of intercolony variation in different age groups will be necessary, this study provides novel insights into dispersal and foraging ecology of the fluttering shearwater, which provide important baseline information for conservation as well as for further ecological studies.” 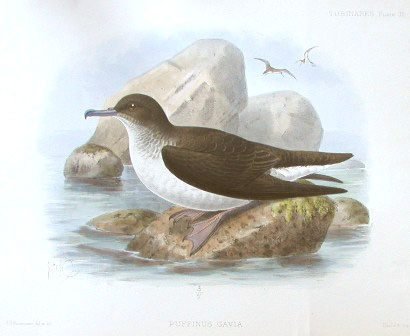