Marion Island, the larger of South Africa’s Prince Edward Islands in the southern Indian Ocean, has been overrun by introduced House Mice Mus musculus since the early 19th Century.  In the absence of rats and following the successful eradication of feral Domestic Cats Felis catus in 1991 the mice are now the only introduced terrestrial mammal on the island.

Long thought to be having little effect on the island’s birds more recent observations have shown that mice on Marion attack chicks of several species, including the ACAP-listed Wandering Albatross Diomedea exulans and Sooty Albatross Phoebetria fusca, with some attacks leading to fatalities (click here). 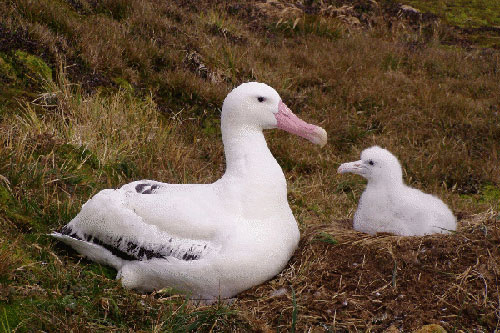 A Wandering Albatross and its chick on Marion Island: at risk to alien House Mice

Previous to these observations the South African Department of Environment Affairs’ then Prince Edward Islands Management Committee (PEIMC) had requested that a review be undertaken of the impacts of mice on Marion Island.  Among its recommendations, the 2011 review called for a study of the feasibility of eradicating Marion’s mice.  A newly constituted Prince Edward Islands Advisory Committee that replaced the PEIMC was established in 2014.  Following a proposal from BirdLife South Africa support from the new committee was forthcoming this year and a berth for an expert has been found on the annual relief expedition which sailed to the island from Cape Town yesterday. 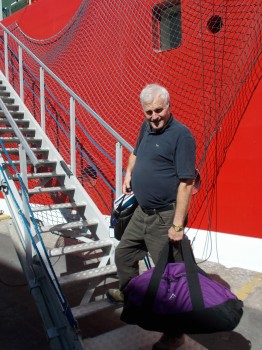 Ready to board: John Parkes on the first step of the ship's gangway

Aboard the S.A. Agulhas II to undertake the feasibility study is John Parkes (a collaborator with Invasive Species International, Landcare Research, New Zealand) who is an internationally respected invasive species ecologist with 35 years’ experience of applied research on vertebrate pests.  John has had a long interest in restoring island ecosystems by eradicating invasive species and specialises in studies to determine whether this is feasible.  He previously undertook a similar feasibility study for Gough Island’s alien House Mice.

ACAP Latest News hopes to report on progress with the feasibility study after the annual relief returns to Cape Town next month.

Parkes, J. 2008.  A Feasibility Study for the Eradication of House Mice from Gough Island.  RSPB Research Report No. 34.  Sandy: Royal Society for the Protection of Birds.  51 pp.