Disappearing ice and the opening Northwest Passage: could albatrosses invade the North Atlantic?

. Seabird McKeon (Smithsonian Marine Station at Fort Pierce, Florida, USA) and colleagues postulate open access in PeerJ PrePrints that sightings of Atlantic seabirds, including of Manx Puffinus puffinus and Great P. gravis Shearwaters, in the North Pacific may be due to the loss of summer ice in the Arctic opening up the Northwest Passage as a route between the two oceans.  Based on their model it may be that North Pacific seabirds, such as the Laysan Albatross Phoebastria immutabilis, could reach the North Atlantic.

Accelerated loss of sea ice in the Arctic is opening routes connecting the Atlantic and Pacific oceans for longer periods each year.  These changes will increase the ease and frequency with which marine birds and mammals are able to move between the Pacific and Atlantic ocean basins.  Indeed, recent observations of birds and mammals suggest these movements are already occurring.  Reconnection of the Pacific and Atlantic Ocean basins will present both challenges to marine ecosystem conservation and an unprecedented opportunity to examine the ecological and evolutionary consequences of faunal exchange in real time.  To understand these changes and implement effective conservation of marine ecosystems, we need to further develop modeling efforts to predict the rate of dispersal and consequences of faunal exchange.  These predictions can be tested by closely monitoring wildlife dispersal through the Arctic Ocean and using modern methods to explore the ecological and evolutionary consequences of these movements.” 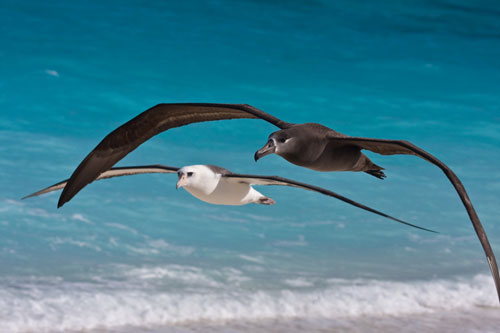