How well do island seabirds recover after invasive mammal eradications?

Michael Brooke (Department of Zoology, University of Cambridge, UK) and colleagues have published in the journal Animal Conservation on the fortunes of 181 island seabird populations of 69 species following successful eradication of invasive mammals.  The paper concludes "We encourage eradication practitioners and funders to consider building the cost of long-term post-eradication monitoring into project budgets in order to more accurately quantify the impacts of eradication on seabirds."

“Seabirds are among the most threatened groups of birds, and predation by invasive mammals is one of the most acute threats at their island breeding stations. Island restoration projects increasingly involve the eradication of invasive non-native mammals, with benefits for seabirds and other island fauna. To date, demonstrated benefits of invasive mammal eradication include increased seabird nesting success and enhanced adult survival. However, the recovery dynamics of seabird populations have not been documented. Drawing on data from across the world, we assemble population growth rates (λ) of 181 seabird populations of 69 species following successful eradication projects. After successful eradication, the median growth rate was 1.119 and populations with positive growth (λ > 1; n = 151) greatly outnumbered those in decline (λ < 1; n = 23, and seven showed no population change). Population growth was faster (1) at newly established colonies compared to those already established, (2) in the first few years after eradication, (3) among gulls and terns compared to other seabird groups, and (4) when several invasive mammals were eradicated together in the course of the restoration project. The first two points suggest immigration is important for colony growth, the third point reflects the relative lack of philopatry among gulls and terns while the fourth reinforces current best practise, the removal of all invasive mammals where feasible.” 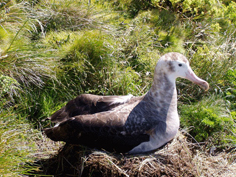 Awaiting the eradication of House Mice on Gough Island: a Tristan Albatross incubates its egg, photograph by John Cooper