Approaching the limit: another Short-tailed Albatross gets taken by a longliner in Alaskan waters

The National Marine Fisheries Service (NMFS) of the United States has reported the incidental take of a globally Vulnerable Short-tailed Albatross Phoebastria albatrus in the logline fishery of the Bering Sea/Aleutian Islands Management Area (BSAI).  The bird was taken on 16 December 2014.

The albatross take was not reported to the NMFS observer on the vessel, nor was the bird retained by the vessel crew.  The bird was later identified by NMFS as a Short-tailed Albatross with the assistance of seabird experts who reviewed video of the bird taken onboard the vessel. The last two documented Short-tailed Albatross fatalities from a longline fishing vessel were recorded in Alaskan waters in September 2014 (click here). 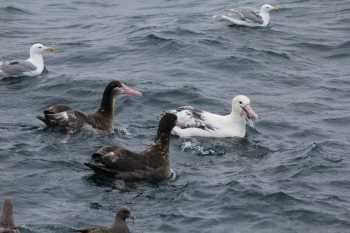 Short-tailed Albatrosses gather off the Aleutians, photograph by Rob Suryan

“The short-tailed albatross is protected in Alaska waters by the Endangered Species Act (ESA).  As a result of consultation with the US Fish and Wildlife Service (USFWS) under the ESA, USFWS issued an incidental take statement of four birds during each two-year period for the BSAI and Gulf of Alaska (GOA) hook and-line groundfish fisheries. In instances where the amount or extent of incidental take is exceeded, reinitiation of formal ESA consultation is required.  This is the third take in the two-year period that began on September 16, 2013. To-date, the incidental take levels have not been reached during the current or any previous Biological Opinions.

The NMFS Alaska Regional Office, NMFS North Pacific Groundfish Observer Program, and the USFWS are actively coordinating efforts and communicating with each other in response to this take incident and are complying to the fullest extent with ESA requirements to protect this species.  NMFS is also working closely with the freezer longline fleet in which the bird was taken, to evaluate what additional actions can be taken by the fleet to avoid further takes.  To assist in this coordinated effort, NMFS reminds operators of hook-and-line vessels in the BSAI and GOA that they are required to employ multiple seabird avoidance measures.  NMFS encourages vessel operators to consider not deploying gear amidst congregations of endangered birds; if possible, move on to a location where you don’t see the short-tailed albatross.

Ed Melvin, a seabird mitigation gear researcher and specialist from Washington Sea Grant, reiterated that in order to keep birds from baited hooks in windy conditions that the streamer line on the windward side should be maintained to windward of the groundline and with a minimum of 200 feet of the line with streamers in the air. This configuration can be achieved by maintaining sufficient drag using a skid buoy with a 10-pound weight fixed at the nose of the buoy. It is this aerial extent of the streamer line with streamers attached that scares birds. The use of round buoys for this purpose should be avoided, as their position astern can be erratic. Also, individual streamers should be long enough to extend to the water. Given that all vessels are different, he recommends that each vessel purchase extra tubing to adjust streamer length as necessary and to make repairs if streamers are damaged. Each crew should have one person in the setting crew responsible for bird avoidance. Additionally, when short-tailed albatross are around the vessel, an additional crew member at the roller may be helpful. NOAA Fisheries also reminds vessel operators that when an observer is on-board, any short-tailed albatross caught by hook-and-line gear be retained and reported immediately to the NMFS observer.” (click here).

Click here for detailed information on seabird avoidance measures in US longline fisheries.