Australia’s MPAs do not well serve its endemic Shy Albatrosses

Claire Mason (Centre of Excellence for Environmental Decisions, School of Biological Sciences, The University of Queensland, St Lucia, Australia) and colleagues have published in the journal Diversity and Distributions on the coverage of foraging areas of globally Near Threatened Shy Albatrosses Thalassarche cauta by Marine Protection Areas (MPAs).

Methods:  We integrated a tracking dataset consisting of 111 individuals collected over 23 years and generated Brownian bridge kernel density estimations to identify important habitat. We quantified the overlap between the foraging distribution of early incubating adults and post-fledgling juveniles with management boundaries and marine reserves. We compared the extent of coverage of albatross foraging areas by Marine Protection Areas (MPAs) relative to a randomly designed network of the same size to determine whether the spatial protection measures are likely to be effective.

Results:  Incubating adults consistently foraged in waters to the northwest of Tasmania while post-fledglings occupied shelf waters around Tasmania and South Australia. We show that our sample of 99 incubating adults adequately represented the population but that our sample of 12 post-fledgling birds was insufficient, thereby limiting the confidence in our results for this life stage. The Commonwealth Government has the majority of management responsibility for shy albatross at-sea, containing 88% and 90% of the area occupied most intensively by adult and post-fledgling shy albatross, respectively. Randomly designed reserve networks outperformed the current MPA network for both life stages, such that the mean protection by a random reserve system was 30% and 12% higher than the actual protection for adults and juveniles in Commonwealth waters.

Main conclusions:  Important foraging habitat of shy albatross from Albatross Island is mostly within Commonwealth-managed waters. The current MPA network, the only spatial protection measure for shy albatross, provides less coverage for this species than a randomly placed network. An increase in the representation of productive shelf waters in MPA networks would benefit the conservation of shy albatross through reducing fisheries interactions and protecting habitat in these regions.” 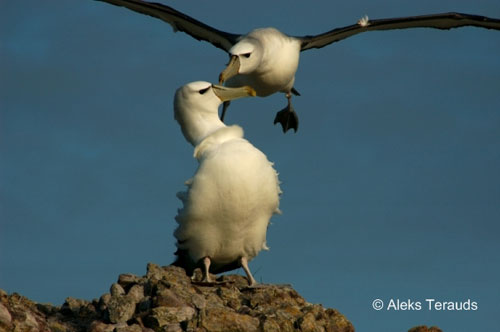