The main focus of the meeting was to draft electronic reporting (ER) standard data fields for operational observer data.  The draft standards use agreed international standards, where appropriate, to facilitate data sharing across RFMOs.  Use of E-Reporting is expected to increase dramatically the timeliness and accuracy of fisheries data submitted to the WCPFC.

Representatives at the meeting reported on a wide range of work being conducted in the region on both ER and electronic monitoring (EM) systems.  The question of the use of electronic data in legal proceedings was discussed and it was noted that this issue has already been successfully addressed domestically by some Members.  Following consideration of the draft data field standards it was agreed seek further comment on the appropriateness of these standards by relevant experts and to trial the standards with the use of sample data.  The draft standards were forwarded for consideration by the WCPFC’s Technical Compliance Committee (TCC11) whose next meeting will be held in Pohnpei, Federated States of Micronesia in September this year, prior to consideration by the next meeting (12th, Bali, Indonesia, December 2015) of the WCPFC Commission. 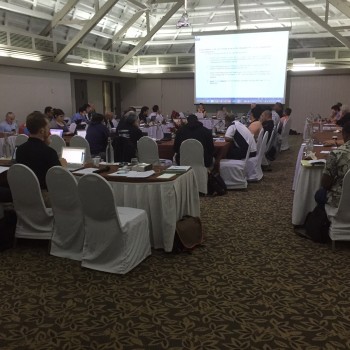 In relation to electronic monitoring, the Working Group recognised that EM systems can support and complement observer programmes and its development was encouraged in areas where data gaps exist, such as longline observer coverage and high-seas transhipments.  It was noted that use of this technology could be of particular use in small longline vessels that did not have the capacity to accommodate an observer, as well as on larger vessels whose trips may extend for over a year, which makes placement of an observer on these vessels very challenging.

Click here for more news of the ERandEMWG1 meeting.