The fishery for Patagonian Toothfish Dissostichus eleginoides around the Falkland Islands (Islas Malvinas)* has received Marine Stewardship Council (MSC) certification this month.  The toothfish are caught by longlines set from a single vessel.

This certification brings to six the number of toothfish fisheries utilizing longlines or trawls in the Southern Ocean that have been approved as considered to be environmentally (and seabird) friendly by the Marine Stewardship Council (click here).

“The fishery entered assessment in August 2012 and was evaluated by independent MSC certifier Intertek Fisheries Certification (formerly Intertek Moody Marine) against the MSC Standard for well-managed and sustainable fisheries in three principle areas: the sustainability of the fish stock, the environmental impacts of fishing activity and the administration system in place for managing the fishery.

The fishery scored well against all the individual performance indicators within each principle achieving a minimum of 80 points on all, bar three performance indicators, giving rise to 3 conditions being placed on the client to be met within the certification period of 5 years.  A further condition was voluntarily agreed by CFL - to conduct further research into the identity of the stock in Falkland’s waters -- following objection to the certification by an Argentine NGO, the Fundación Vida Silvestre Argentina.” (click here and here). 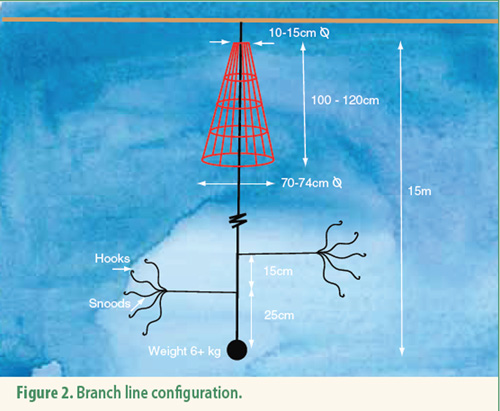 Management measures used by the now-certified fishery to reduce bycatch of albatrosses and petrels include deployment of bird scaring lines, night-setting of lines, line weighting, use of only thawed bait, careful management of offal discharge, removal of hooks from offal and bycatch, and use of the ‘Brickle curtain’ to deter birds from bait during hauling.  The use of the Chilean ‘umbrella’ hook system also significantly discourages interactions with seabirds and marine mammals.