ACAP Breeding Site No. 84. Tagomago and the western islets off Ibiza – cliff homes of the Balearic Shearwater

The Pitiüses (Pityusic Islands) are the southernmost group of islands in Spain’s Balearic Archipelago in the western Mediterranean. This local group includes two major islands, Ibiza (known locally as Eivissa) and Formentera, plus a handful of scattered islets. Altogether, they represent a breeding stronghold for the Critically Endangered Balearic Shearwater Puffinus mauretanicus, endemic to the archipelago.  About 40% of the global population of this ACAP-listed species (estimated at over 3000 pairs) breeds in the Pitiüses group, scattered between Formentera (click here) and its surrounding islets in the south, Tagomago islet in the east and a set of islets to the west of Ibiza.

Illa de Tagomago is a 554-ha privately-owned island that lies 1.5 km off the north-east coast of Ibiza, surrounded by cliffs of variable height of up to 50 m where Balearic Shearwaters breed in crevices, small caves and under rock boulders.  A tentative population estimate of 200 breeding pairs of Balearic Shearwaters that have not been monitored for over 15 years requires confirmation.  The species is exposed to predation by Black Rats Rattus rattus, as well as to the effects of light pollution and human disturbance from a luxury hotel.  Tagomago is included as a Special Protection Area (SPA) in the EU Natura 2000 network. 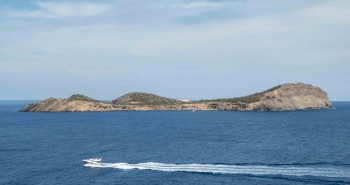 Tagomago, off the north-east coast of Ibiza is a private island holding a luxury hotel

The western islets of Ibiza

The western islets of Ibiza are all included within the Natural Reserve of Es Vedrà, es Vedranell i els illots de Ponent, and can be divided in turn into two sub-groups, es Vedrà and es Vedranell off south-east Ibiza, and the remaining illots de Ponent a little farther north. 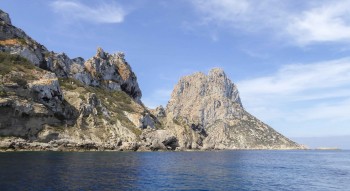 es Vedrà is an uninhabited 70-ha islet 410 m high, with steep rocky slopes, about 2 km off the coast of Ibiza.  es Vedranell lies about 300 m inshore from it, and is also rocky and steep, but smaller, at about 17 ha and 104 m high.  About 9 km northwards, and extending from the coast to 5.5 km offshore, lie the sub-group of illots de Ponent, made up of the islets of sa Conillera, es Bosc, s’Espartar and ses Bledes, totalling 153 ha. These islands are overall flatter than the sub-group of es Vedrà-es Vedranell, are scrub-vegetated with occasional pine tree aggregations, and with medium to low cliffs alternating with rocky stretches of coastline.

Whereas es Vedrà and es Vedranell have not received any particular attention regarding the Balearic Shearwater, a breeding monitoring programme has been in place since 2011 on the illots de Ponent, thanks to the collaborative efforts of several research and conservationist organizations with funds from various sources.  This has allowed an update of the breeding population estimates and the collection of long-term demographic data to assess population trends. 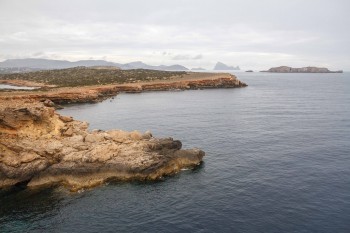 The cliffs of sa Conillera, where several Balearic Shearwaters breed. S’Espartar is the islet at the top right; the highest islet farther away at its left is es Vedrà 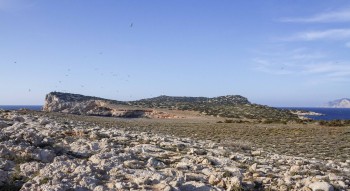 Adult Balearic Shearwater at a monitored nest on sa Conillera

The main attention has been focused on sa Conillera and es Bosc, where 250 and 60 breeding pairs are estimated, respectively. These figures must be considered as tentative, despite the survey effort, because many breeding areas are inaccessible.  Of these estimates, 80 nests are monitored annually in sa Conillera, and 25 in es Bosc.  Another seven nests are monitored in s’Espartar, where the difficult terrain has precluded an extensive prospection of nests (tentatively estimated around 75 for the whole islet).  No nests have been found yet on the ses Bledes small islets, although there has been no exhaustive search so a few pairs could breed there. As for es Vedrà and es Vedranell, the breeding population of Balearic Shearwaters is tentatively estimated at 50 and 10 pairs, respectively, although there have been no search for over 15 years.  Taking into account habitat features, these estimates may be too optimistic. 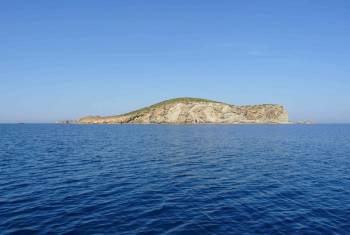 es Bosc, an islet covered by low vegetation and surrounded by a rocky coast 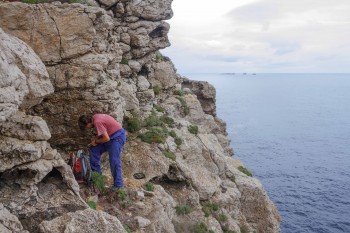 Checking a nest on the highest cliff area of sa Conillera, with ses Bledes islets in the background 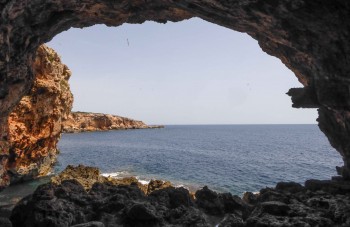 The Natural Reserve includes all the islets and their immediate surrounding sea, on the basis of locally endemic flora and fauna, seagrass prairies and other well-preserved marine habitats. Also present are Scopoli’s Shearwaters Calonectris diomedea (about 200 pairs) and the Mediterranean Storm Petrels Hydrobates pelagicus melitensis (900-1750 pairs, including a very important colony on s’Espartar).  A management plan for the reserve is in place, including the full protection of the islets (no landing is allowed except for research and conservation purposes). Moreover, the area is also designated within the Natura 2000 network, including a large marine area.

Several of the islets contain Black Rats, although there does not seem to be strong predation pressure from them on the Balearic Shearwater. An eradication campaign was conducted in 2008-2010 on es Bosc, apparently with a successful outcome, although its short distance to the coast of Ibiza might lead to recolonisation in the future.  es Vedrà has a population of feral Domestic Goats Capra aegagrus hircus that may have had an impact on the shearwaters and/or their habitat, although recent control efforts seem to have successfully eradicated them. Finally, although human access is restricted to the islets, the fact that they remain in private hands represents a risk.  For instance, the owner of sa Conillera recently planned to convert the islet’s lighthouse into a luxury hotel, which would imply a higher risk of access of predators, plus an increase of human disturbance (click here).  Light pollution may also be a problem due to the proximity of inhabited areas of the coast of Ibiza.