In the time of cholera: the threatened albatrosses of Amsterdam Island

“Infectious diseases may be particularly critical for the conservation of endangered species. A striking example is the recurrent outbreaks that have been occurring in seabirds on Amsterdam Island for the past 30 years, threatening populations of three Endangered seabird species and of the endemic, Critically Endangered Amsterdam albatross Diomedea amsterdamensis. The bacteria Pasteurella multocida (avian cholera causative agent), and to a lesser extent Erysipelothrix rhusiopathiae (erysipelas causative agent), were both suspected to be responsible for these epidemics. Despite this critical situation, demographic trends were not available for these threatened populations, and the occurrence and characterization of potential causative agents of epizootics remain poorly known. The aims of the current study were to (i) provide an update of population trends for four threatened seabird species monitored on Amsterdam Island, (ii) assess the occurrence of P. multocida, and E. rhusiopathiae in live birds from five species, (iii) search for other infectious agents in these samples and, (iv) isolate and genotype the causative agent(s) of epizooties from dead birds. Our study shows that the demographic situation has worsened substantially in three seabird species during the past decade, with extremely low reproductive success and declining populations for Indian yellow-nosed albatrosses Thalassarche carteri, sooty albatrosses Phoebetria fusca, and northern rockhopper penguins Eudyptes moseleyi. Pasteurella multocida or E. rhusiopathiae were detected by PCR in live birds of all five investigated species, while results were negative for eight additional infectious agents. A single strain of P. multocida was repeatedly cultured from dead birds, while no E. rhusiopathiae could be isolated. These results highlight the significance of P. multocida in this particular eco-epidemiological system as the main agent responsible for epizootics. The study stresses the urgent need to implement mitigation measures to alter the course of avian cholera outbreaks threatening the persistence of seabird populations on Amsterdam Island.” 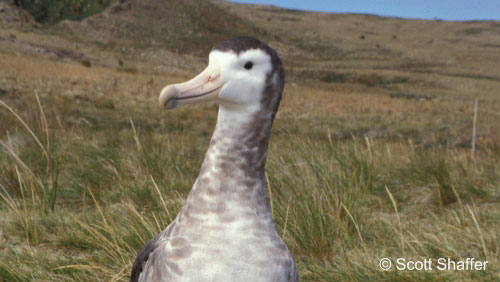 Amsterdam Albatross, endemic to Amsterdam Island and at risk to avian cholera; photograph by Scoyy Shaffer