Australians and New Zealanders get voting again for Bird of the Year: Short-tails, Antipodeans or Whenua Hous?

Each year Australians and New Zealanders get the chance to vote for their favourite bird in Bird of the Year (BOTY) competitions.

The Aussies have come up with 50 birds on their list this year; but only two on the voting list of 50 are seabirds.  These two marine birds are the Little Penguin Eudyptula minor and the only procellariiform species, the Short-tailed Shearwater Ardenna tenuirostris, a species currently of some concern as the back migration from Alaskan waters to islands around Tasmania is running late and so far very few birds are being seen, pehaps due to die-offs in the northern hemisphere (click here and here).  Might this lead to a change from its Least Concern status?

Unfortunately, the shearwater is currently coming third last in the 48th position with only 157 votes at the time of writing, so it looks very much like it will not get past the first round (nor it seems will the penguin, which is currently in the 16th position).  Albatross and petrel lovers are not completely left out, however, as the opportunity exists for a write-in species (but it “must have wings”).  ACAP-listed Shy Albatross Thalassarche cauta, endemic to Australia and globally Near Threatened, anyone?  Move fast though as at the end of the first round the 10 birds with the most votes will automatically make it to the final round of voting, and the first round closes at the end of this week on 8 November!

Over in New Zealand, often deemed the “seabird capital of the world”, the BOTY 2019 choice is far better for the fish-eaters (unlike in Australia, there are no less that 10 ACAP-listed albatrosses and petrels on the BOTY list) – and the rules are rather different.  “The organiser of the annual avian electoral race, Forest & Bird, is using a Single Transferable Voting (STV) system this year where Kiwis can rank their five favourite native birds.”  Voting closes at 127h00 [local time] on this Sunday (10th). To cast your vote, click here.

So where does the globally Endangered (and nationally Critical) Antipodean Albatross Diomedea antipodensis fit in?  It’s the first choice of ACAP’s Executive Secretary (and Kiwi), Christine Bogle of course!  Not to be outdone, New Zealand’s Minister of Conservation, Eugenie Sage MP has announced on her Facebook page “this year I’m officially backing the Gibson's albatross for Forest & Bird's Bird of the Year 2019”.  ACAP recognizes Gibson’s Albatross of the Auckland Islands as a subspecies, gibsoni, of the Antipodean, so that’s really two votes for a species that has been recognized as of special concern by ACAP.  It’s also a species up for listing on Appendix 1 of the Convention on Migratory Species because of its threatened status next year – as tomorrow’s post to ACAP Latest News will detail. 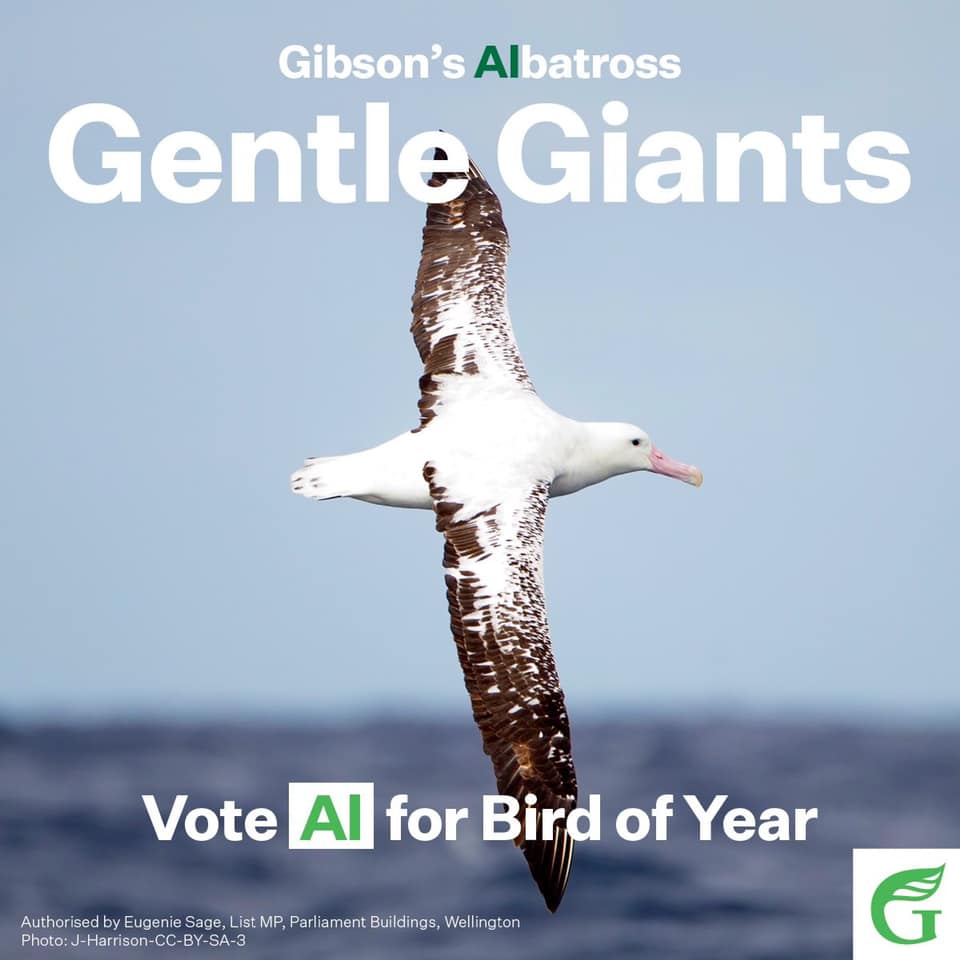 "Diomedea antipodensis gibsoni are among the largest of the world’s seabirds. They live to 50-60 years if they manage to avoid being hooked on a fishing longline. They only breed on the remote Auckland Islands and they fly to the seas off Chile and southern Australia to feed. Their numbers have declined dramatically and they need our help." - Eugenie Sage MP

Lastly, what about the Whenua Hou Diving Petrel Pelecanoides whenuahouensis, New Zealand’s newest (too new even to have yet got a global category of threat) and it seems, rarest seabird?  It’s not ACAP-listed but another New Zealander, Igor Debski, Co-convenor of ACAP’s Seabird Bycatch Working Group, has the “Flying Penguin” as his first choice, writing to ALN: “it’s been rather overlooked previously and at less than 100 pairs, and at high risk to climate change, I think it really needs a lift in its profile.”

But maybe all academic, yesterday’s news is that that with only a few days of voting left there the only seabird in the top five so far is the globally Endangered Yellow-eyed Penguin or Hoiho Megadyptes antipodes.