Moving out of harm’s way: an Antipodean Albatross chick gets a helping hand during the “Million Dollar Mouse” eradication project

One member of the “Million Dollar Mouse” field team on New Zealand’s Antipodes Island aimed at eradicating House Mice Mus musculus in 2016 was Keith Springer, with the dual roles of Operational Advisor and Safety Officer.  Keith had previously managed a similar successful eradication exercise on Australia’s Macquarie Island so was well fitted for these roles.

Keith writes to ACAP Latest News with a special memory of his time on the island:

“We were about to change the orientation of the flight line for baiting the Antipodes, due to a wind change, and this chick [of a globally Endangered Antipodean Albatross Diomedea antipodensis] on its nest would have been nearly under the helicopter as it hovered to pick up a load of bait.  So we moved the chick and put it into an empty bait pod strewn with tussock - out of the wind and the noise and the proximate human activity.  When we opened the pod at the end of the day to return it to its nest it was fast asleep.” 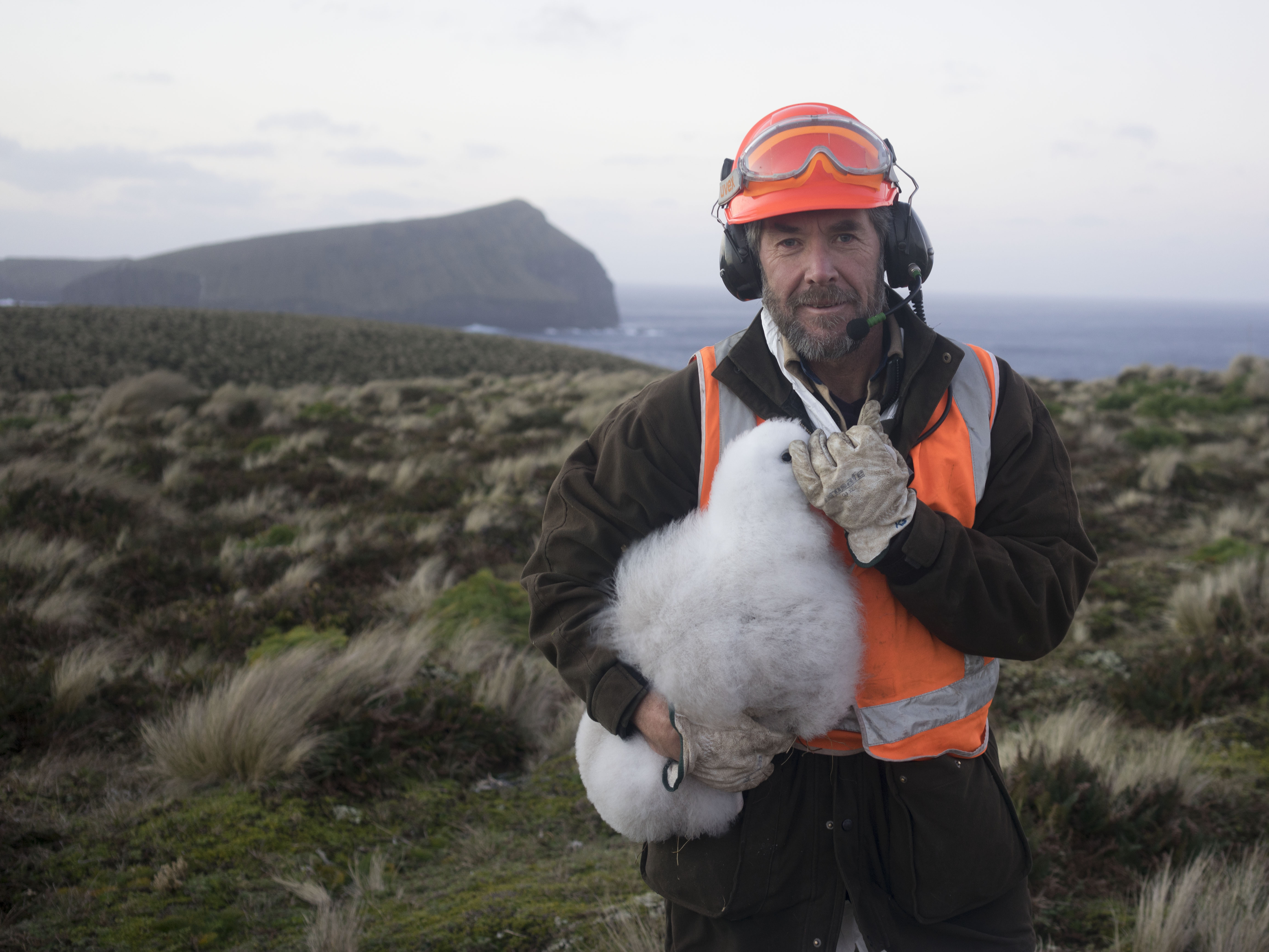 More information on the incident comes from the Department of Conservation’s Project Report written after completion of the eradication attempt as precised here: “Bait pods were positioned  … to avoid as far as practicable, impacts on Antipodean Albatross chicks on nests at the time.  Seven albatross chicks were on nests within 50 m of active areas at the bait-loading site, exposed to the greatest amount of low-altitude helicopter activity.  When exposed [to strong rotor wash], chicks stayed sitting on the nest, tucking their head down or under their wing without obvious alarm.  In most cases the response was like that observed during frequent stormy conditions.  On two occasions an albatross chick was uplifted from its nest during loading as the wind direction and limited number of remaining bait pods meant the position of helicopter would have directed severe rotor wash towards it.  The chick was placed in an empty wooden pod lined with tussock and enclosed for up to three hours.  It was asleep when retrieved from the pod on the first occasion and again seemed settled on the second occasion.  It [was] transferred back to its nest each time without any issues and fledged in February 2017.”

All seven chicks within the load site were alive at the completion of operations and six of the seven (86%) fledged successfully in early 2017.  Outside the load site the fledging rate of chicks alive at the time of bait sowing was 90%; this difference is not statistically significant.

Let’s hope the chick survives it juvenile years at sea and in a few years returns to Antipodes to commence breeding on a now mouse-free island, to be identified by the band placed on it as a chick.

With thanks to Finlay Cox, Stephen Horn and Keith Springer.