Black-footed Albatrosses at sea overlap with the Hawaiian longline fishery

“A serious threat to pelagic seabird populations today is interactions with longline fisheries. While current seabird mitigation efforts have proven successful in substantially reducing seabird interactions in the Hawai‘i-based longline fishery, black-footed albatross (Phoebastria nigripes) interactions have increased. In an effort to better understand when and where these interactions take place, we explore the relationship between black-footed albatross sightings in the Hawai‘i-based deep-set longline fishery and fleet dynamics and environmental variables. Environmental drivers include both large-scale climate variability due to the Pacific Decadal Oscillation (PDO) and El Niño – Southern Oscillation, as well as local oceanographic and atmospheric drivers, such as wind patterns, sea surface temperature, and surface chlorophyll. Using generalized linear models, we found that while season, latitude, and longitude of fishing explained much of the variation throughout the time series, both large scale and local climate variables – positive PDO, strong westerly winds, and cooler sea surface temperatures – explained the increase in black-footed albatross sightings in recent years. Black-footed albatross nest in the Northwestern Hawaiian Islands, and their main foraging habitat while nesting are the productive fronts to the north and east of the Hawaiian Islands. During a positive PDO, a more intense and expanded Aleutian Low shifts westerly winds southward, replacing trade winds in the northern region of the longline fishing grounds. The expanded westerly winds may have two impacts. Firstly, they drive productive surface waters to the south, increasing the overlap of the albatross foraging grounds and the deep-set fishing grounds. Secondly, when westerlies move south, more birds transit through the fishing grounds to the east rather than traveling north to reach the westerlies before traveling eastward north of the fishing grounds. Because the PDO operates on decadal timescales, the high levels of sightings and interactions may persist for many years.” 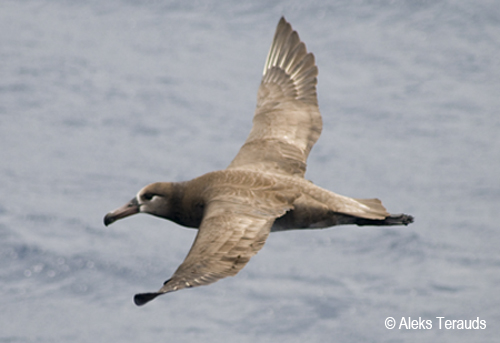