The Royal Society for the Protection of Birds (RSPB) is leading the eradication of introduced House Mice Mus musculus from the United Kingdom’s Gough Island in the South Atlantic in the austral winter of next year as a key component of the Gough Island Restoration Programme.  Mice on Gough attack and kill many seabirds, including chicks of several ACAP-listed species, most notably the Critically Endangered and near-endemic Tristan Albatross Diomedea dabbenena, as well as of burrowing petrels, such as the Endangered McGillivray’s Prion Pachyptila mcgillivrayi, only recently discovered to be breeding on the island. 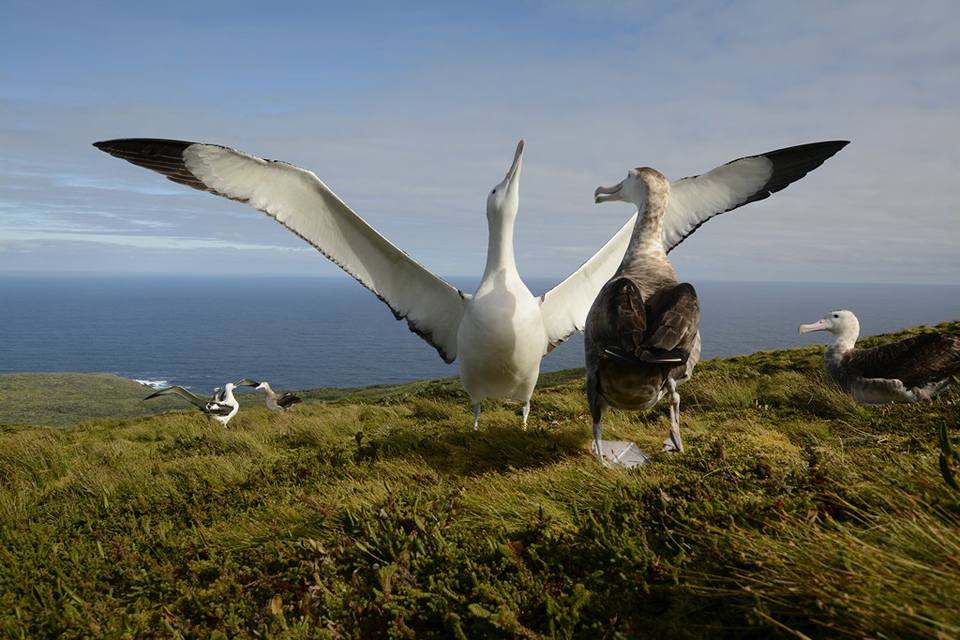 The operation to eradicate the mice by the aerial distribution of poison bait will be undertaken in three main phases:

March – May 2020.  Establishment of baiting and aviculture infrastructure by the Avicultural Team.  Capture and holding of populations of the endemic and Critically Endangered Gough Bunting or Finch Rowettia goughensis and the Vulnerable Gough Moorhen Gallinula comeri, both of which studies have shown will be at risk to non-target poisoning.

September – December 2020.   Staged release of the captive finches and moorhens.

The baiting operation will involve the aerial application of c. 200 tonnes of cereal bait approximately 20 persons is required for the Baiting Team.  The team will leave Cape Town on South Africa’s Antarctic research and supply vessel, the S.A. Agulhas II, in mid-May and return to Cape Town at the end of August.  Accommodation while on Gough Island will be in shared bedrooms in the South African weather station or in a Weatherhaven portable shelter.

The primary role for the Baiting Team will be to load manually 25-kg bags of bait (up to 36 bags per load) into the helicopter spreader buckets in rapid succession.  All the team members must be able to lift 25-kg bags up to one metre high for most of a day at one of two loading sites operating simultaneously.  Having additional technical skills (e.g. radio communication, mechanical, electrical, engineering, construction) will be seen as a decided advantage in choosing successful applicants.

Other tasks that the team will be required to undertake include training, assisting with unloading and reloading the ship, establishing and maintaining a remote field camp, setting up loading sites for each operational day, disposing of empty bags and bait storage pods, assisting with hand baiting around the base and domestic duties including cleaning and assisting with cooking.

The RSPB is the lead organization in delivering the Gough Island Restoration Programme, working in close partnership with the Tristan da Cunha Council and Government, BirdLife South Africa, the (recently renamed) South African Department of Environment, Forestry and Fisheries and Island Conservation.  The programme is part-funded by the RSPB, the UK Government, the National Fish and Wildlife Foundation and other individuals and organisations.  The Gough Island Restoration Programme may also be followed on Facebook.

With thanks to Andrew Callender, Carol Jacobs and Pete McClelland.