Jean-Baptiste Thiebot (National Institute of Polar Research, Tokyo, Japan) and colleagues have published in the Journal of Ornithology on using a metal detector to inform interactions between globally Near Threatened Black-footed Albatrosses Phoebastria nigripes breeding on Torishima with a local artisanal longline fishery.

“Incidental capture in fisheries (“bycatch”) is a major threat to global marine biodiversity, especially to those species with low fecundity, such as albatrosses. Efforts to reduce bycatch have been undertaken in industrial fisheries, but the scale of seabird interactions with artisanal or small-scale fleets remains largely unknown. The island of Torishima (Japan) is an important breeding site for two albatross species (short-tailed Phoebastria albatrus and black-footed P. nigripes) and also lies in the range of the artisanal longline fishery for the splendid alfonsino Beryx splendens. In February–March 2017, we tracked 23 foraging trips of adult P. nigripes feeding chicks by Global Positioning System (GPS) and monitored the prevalence of fishing gear at the nests using a metal detector. The foraging range of these albatrosses was a maximum of 280 km from Torishima, and only 3.7% of the GPS locations occurred over the shallow habitats targeted by the alfonsino fishery (water depth 150–500 m), suggesting relatively low risks of interaction. However, 190 (54.3%) nests of P. nigripes contained fishing gear, among which 12 (3.4%) nests or chicks contained a hook or an unidentified metallic object. Six hooks were also collected from P. albatrus nests. All found hooks, except one, originated from the alfonsino fishery, indicating that both targeted albatross species actually interacted with this fishery at sea. Both research approaches provided data from returning birds only and did not reflect possible lethal cases at sea. Monitoring the sub-lethal effects of bycatch and encouraging small-scale fisheries to report gear lost at sea are two possibilities to further help quantify and reduce the impact of fisheries on seabirds.” 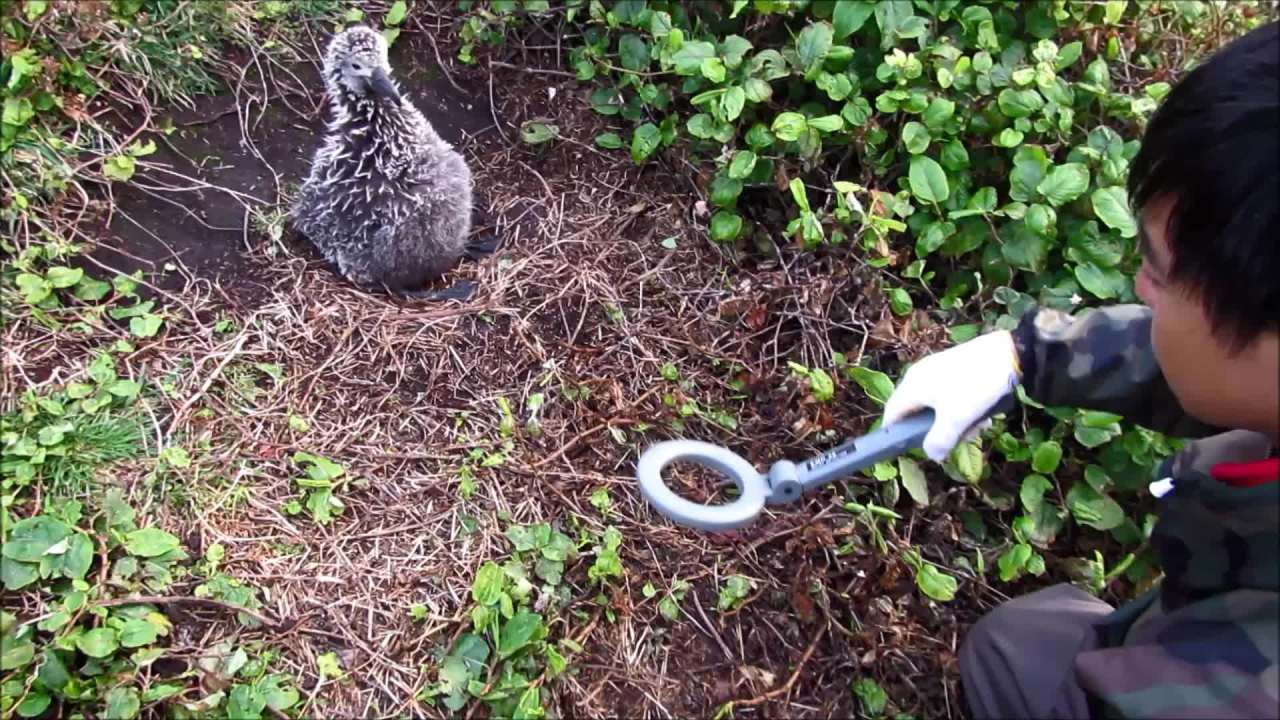 "A case of detected metal inside a chick. The observer (Bungo Nishizawa) first tests the sensitivity of the metal detector on his wristwatch, then checks the area around and inside the nest, and finally passes the detector against the chick’s belly.  Video taken by J.-B. Thiebot"