The genetic structure of Southern Ocean seabirds gets a review

Kathrin Munro and Theresa Burg (Department of Biology, University of Lethbridge, Lethbridge, Canada) have published in the Australian journal Emu - Austral Ornithology on the genetic structure of Southern Ocean seabirds, including ACAP-listed albatrosses and petrels.

“Genetic signatures of historical, behavioural and environmental processes are evident in contemporary seabird populations. Molecular markers have allowed us to determine historical patterns of gene flow, relationships among taxa, and contemporary dispersal barriers. The Southern Ocean contains a number of small, isolated islands that are home to four families of seabirds: albatrosses, petrels, penguins and skuas, which have been the focus of a number of population genetic studies. While capable of travelling large distances, many seabirds have restricted dispersal and exhibit high levels of population structure; typically in northern areas and areas with high endemism (e.g. New Zealand). We reviewed 29 studies of 25 Southern Ocean seabird species comparing biogeographic patterns, glacial history and barriers to gene flow, especially at-sea distribution and ocean currents. Despite diversity in behaviour and life history, our review demonstrates that population genetic structure of the seabirds corresponds to the same barriers. For penguins, currents are the major impediment to dispersal whereas at-sea distribution and island location influence population structure for many seabirds with genetically distinct populations on islands at the periphery of their range. As environmental conditions change, it will become more important to assess how seabirds respond and how these changes influence both dispersal and population structure. It is particularly important as a disproportionately high number of Southern Ocean seabirds are threatened or near threatened. Future studies need to focus on adaptive genetic markers, range-wide comprehensive sampling, influence of behaviour on genetic structure and lesser studied seabirds such as terns and cormorants.” 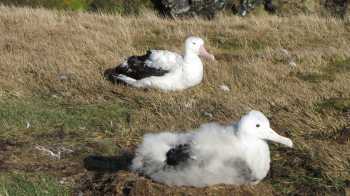