Workshop "Incidental Capture of Seabirds: Solutions in the Southern Cone" adopts the Valdivia Declaration in Chile

Based on the available evidence a rough estimate would suggest that up to 25 000 seabirds, mainly albatrosses, are killed in fisheries in the southern cone of South America each year. The species affected are predominantly from the Falkland Islands (Islas Malvinas)* and South Georgia (Islas Georgias del Sur)* and Chilean islands off the southern tip of South America.

The fisheries concerned are trawl fisheries that target different species of hake along the Patagonian Shelf, around Cape Horn and up into the Humboldt Current.  These Large Marine Ecosystems are some of the most productive ecosystems in the world and represent critically important foraging grounds for many species of seabird.  The resulting overlap in fishery effort and seabird abundance is what leads to the unfortunate interactions, where seabirds are struck by trawl cables or drowned in fishing nets.

In both Argentina and Chile, national fishery research institutes (Instituto Nacional de Investigación y Desarrollo Pesquero (INIDEP) in Argentina and Instituto de Fomento Pesquero (IFOP) in Chile) employ fishery observers to monitor fish catch and operations. As part of their daily duties, fishery observers are now recording seabird mortality and using that information to report to the Agreement on the Conservation of Albatrosses and Petrels (ACAP). Through this work we are able to gain a better understanding of the levels of seabird bycatch in the region, and the cumulative impact of multiple fisheries on endangered seabird populations.

The next steps toward reducing the unsustainable levels of bycatch across the southern cone will need a process of the governments passing fishery regulations that require all vessels to implement mitigation measures, and for the national fishery observers to record and report on compliance levels. To encourage swift progress and provide support, BirdLife International hosted a workshop in Valdivia, Chile in January this year entitled “Incidental Capture of Seabirds: Solutions in the Southern Cone”.

In the workshop staff from the ATF and BirdLife International, representatives from the two national fishery research institutes and government worked with the ACAP Executive Secretary, Marco Favero to collaborate on planning a path toward more sustainable fisheries, through the introduction of seabird bycatch mitigation measures in the fisheries and seabird monitoring programmes to record compliance with these measures. 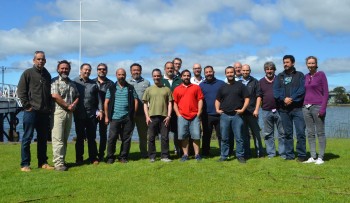 The participants of the workshop: “Incidental Capture of Seabirds: Solutions in the Southern Cone"

One message from the workshop stood out: individual efforts often make a crucial difference in the fight to save endangered species, and the workshop attendees signed a declaration of intentions – The Valdivia Declaration – to indicate their joint dedication toward driving seabird conservation efforts over the next two years. The balance between threatened seabird populations recovering or declining further will rest with many of the people attending the workshop, marking a hugely important occasion and providing great hope for albatrosses.

Working towards the reduction of seabird bycatch in Southern Cone fisheries

Workshop "Incidental Capture of Seabirds: Solutions in the Southern Cone"

Seabirds, and albatrosses in particular, are threatened with extinction, in large part due to interactions with fisheries;

There are simple, economical and effective solutions that, when properly implemented, can mitigate the negative effects of these interactions;

States are responsible for the administration, sustainable use of natural resources and conservation of ecosystems;

Fisheries research institutes have a fundamental and mandatory role in data collection and generation of information on fishing activity including effects on the ecosystem, which contribute to decision making;

The main objective of BirdLife International's Marine Programme is to improve the conservation status of seabirds, through a collaborative approach with national and international organisations;

In light of the reasons stated, the participants of the Workshop "Seabird Bycatch: Solutions in the Southern Cone" declare our willingness to collaborate in conducting actions to improve the conservation status of seabirds, including:

(1) Improve the standardised collection of seabird interactions and mortality data that allow spatially and temporally stratified analyses;
(2) Promote the integration of information between the different organisations at a national and international level;
(3) Develop, propose and implement conservation measures to mitigate the incidental mortality of seabirds in southern cone fisheries;
(4) Promote the revision and implementation of National Plans of Action to reduce the interactions between seabirds and fisheries;

NOTE:  ACAP’s Executive Secretary, Marco Favero, who attended the workshop, writes to ALN that the ACAP Secretariat welcomes the Valdivia Declaration and offers secretarial assistance in implementing its actions.