The results are in for the annual census of Laysan Phoebastria immutabilis and Black-footed P. nigripes Albatrosses on Kure Atoll in the North-Western Hawaiian islands. 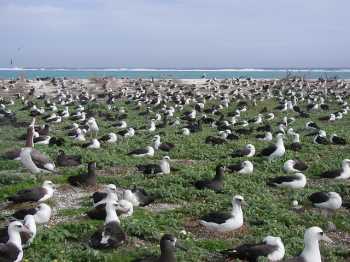 A mixed colony of Black-footed and Laysan Albatrosses

“We had an increase of about 11 000 Laysan Albatrosses and a few more Black-footed Albatrosses from last year. This year, we counted a total of 35 360 mōlī [Laysans] and 3381 kaʻupu [Black-foots].”

It is assumed the count was of incubating birds since nest contents were checked: “As I went to confirm whether or not an albatross was sitting on an egg, I found one sitting on a light bulb, another on a golf ball, and a few sitting on two eggs.”

The census took a team of five working for the non-profit foundation Kure Atoll Conservancy six days to complete.