Canada re-assesses the national status of the Pink-footed Shearwater, a non-breeding visitor from Chile

The ACAP-listed and globally Vulnerable Pink-footed Shearwater Ardenna creatopus has had its national status recently re-assessed by the Committee on the Status of Endangered Wildlife in Canada (COSEWIC),as Endangered (defined as facing imminent extirpation or extinction) from its previous 2004 category of Threatened* (click here). 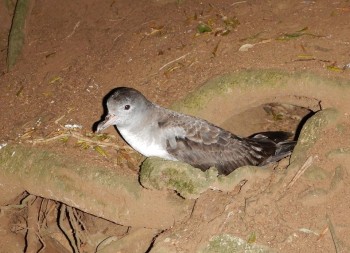 “Breeding on only three small islands off the coast of Chile, many of these birds travel thousands of kilometres north to feed along the coast of British Columbia during our summer months.  The species' southern home is under multiple threats from humans and exotic predators, and shearwaters are killed as fishing by-catch throughout its range.”  However, it is to be noted that despite the worsening category of threat there are as yet no records of the shearwater being taken by commercial fisheries in Canada’s Pacific waters.

Click here for more details of the November 2016 re-assessment.

COSEWIC assesses the status of “wild species, subspecies, varieties, or other important units of biological diversity” considered to be at risk.  The Pink-footed Shearwater currently remains listed as nationally Threatened under Canada’s Species At Risk Act (SARA).

The purpose of SARA is to protect wildlife species at risk in Canada.  COSEWIC was established as an independent body of experts within the Act responsible for identifying and assessing wildlife species considered to be at risk.  Species that have been designated by COSEWIC may then qualify for legal protection and recovery under SARA.

Canada is not a Party to the Albatross and Petrel Agreement but has been regularly sending an observer to attend and contribute to its meetings.

*Note that Canadian national categories of threat do not match those used internationally by BirdLife International and IUCN.  BLI/IUCN ‘Vulnerable’ is approximately the equivalent of COSEWIC ‘Threatened’; and BLI/IUCN ‘Critically Endangered’ and ‘Endangered’ are roughly the same as COSEWIC ‘Endangered’

With thanks to Ken Morgan.