Johan Elmberg (Division of Natural Sciences, Kristianstad University, Sweden) and colleagues have published in the journal Marine Ornithology on the passage of seabirds, including the ACAP listed and Critically Endangered Balearic Shearwaters Puffinus mauretanicus, past a Portuguese headland.

“Land-based counts of migrating seabirds remain essential to increase knowledge about their numbers and movements.  To assess the value of Cabo Carvoeiro (Peniche, Portugal) as a monitoring site in the East Atlantic, we studied seabird species composition, passage patterns and flock size during mid-October 2014.   During standardized counts, we observed nearly 8000 seabirds of 17 species. The ratio of individuals passing in a southerly to southwesterly direction was >96% in all species, showing that genuine migrants were counted. The passage rate (birds/hour) was higher for Northern Gannets Morus bassanus than for any other species, by a factor of approximately 50 (morning mean 906/h, afternoon mean 1153/h).  The globally endangered Balearic Shearwaters Puffinus mauretanicus, Great Skuas Stercorarius skua and Pomarine Skuas S. pomarinus had passage rates of 10–25/h.  Flock size distribution in the 11 most numerous species showed that most migrated singly or in groups of two.  Flock size was larger in Balearic Shearwaters than in both Cory’s Calonectris borealis and Manx Shearwaters P. puffinus.  Among skuas, flock size was larger in Pomarine than in Great Skuas.  The passage rate of Manx Shearwaters was positively correlated with that of Northern Gannets, Great Skuas and Sandwich Terns Sterna sandvicensis.  Northern Gannets showed a positive co-variation with Pomarine Skuas. Balearic and Sooty Shearwaters Ardenna griseus [=grisea]were the only species that did not show any significant co-variation with another species. Morning and afternoon passage rates did not differ significantly in any of the six most numerous species (Northern Gannets, Cory’s and Balearic Shearwaters, Great and Pomarine Skuas, and Sandwich Terns), or in Sooty Shearwaters (less numerous).  Thus, the passage rates at Cabo Carvoeiro in October of Balearic Shearwaters and five other species were as high or higher than those reported from any other seawatch in Portugal, indicating the international value of seabird monitoring at Cabo Carvoeiro during the autumn migration.” 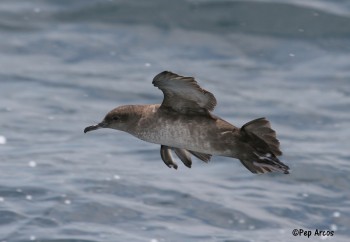