Sarah Gutowsky (Dalhousie University, Halifax, Canada) has submitted her thesis in partial fulfilment of the requirements for the degree of Doctor of Philosophy that looks at analysing at-sea movements of Black-footed Phoebastria nigripes and Laysan P. immutabilis Albatrosses.

“Wide-ranging pelagic seabirds are among the most threatened and most mobile of all marine taxa.   Understanding their movement ecology is necessary to develop effective conservation solutions for declines, yet many drivers of their movements throughout the life cycle are poorly understood. Particularly, movements during two critical life stages are known in little detail for many species: the period of post-natal dispersal for fledglings and the non-breeding period for adults.  Biologging technologies provide means to study individual at-sea movements during all life stages.  However, advances in analytical approaches for examining biologger data have in some cases lagged behind that of the technologies themselves.  The objectives of my thesis are to address weaknesses in our understanding of seabird movement ecology and in the approaches used to describe seabird movement from biologger data, using two threatened seabirds, the Laysan Phoebastria immutabilis and black-footed P. nigripes albatrosses, as models.  In Chapter Two, I describe for the first time the movement and habitat of black-footed albatross fledglings, and compare with those of non-breeding adults.  In Chapter Three, I develop an approach to assess detailed activity budgets for non-breeding seabirds, and apply this method to explore drivers of non-breeding movements for both model species.  In Chapter Four, I evaluate the limitations of a common approach where period-specific space use for a group, such as a colony, is inferred from a sample of biologger-equipped individuals.  In Chapter Five, I build a conceptual framework of the drivers of movement with a focus on the albatross family (Diomedeidae), and apply this to identify trends and weaknesses in the literature on albatross movement.  My work demonstrates the value of taking a holistic view of seabird movement ecology; interpreting observed movement patterns requires considering multiple interacting factors that drive individuals to move, including intrinsic factors, such as age, breeding phase, and moult status, as well as how “decisions” are made of when and where to move, and what modes of movement are used.  Biologging tools afford insights into these drivers of movement, especially when the individual nature of biologger data is considered in analyses, with implications for ecological understanding and conservation.” 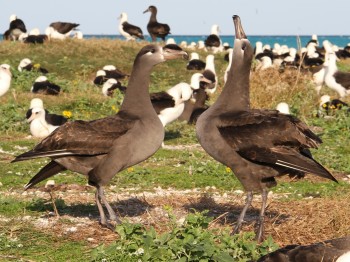