On the way out? The Critically Endangered Balearic Shearwater faces a fisheries discard ban

Meritxell Genovart (Population Ecology Group, IMEDEA (CSIC-UIB), Mallorca, Spain) and colleagues have published in the Journal of Applied Ecology on the effects of fishery practices (longlining and an intended discard ban) on the ACAP-listed and Critically Endangered Balearic Shearwater Puffinus mauretanicus. 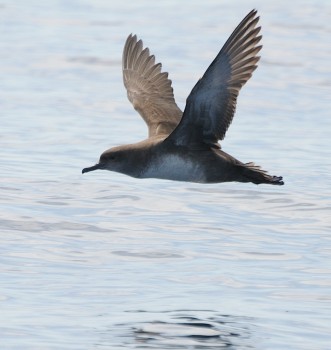 “1. World-wide, many seabirds are affected by fisheries in opposing ways: as a source of mortality from bycatch, but also by providing discards as a predictable and abundant food resource.  This applies to the Balearic shearwater Puffinus mauretanicus, the most endangered European seabird, whose time to extinction was estimated at only ~40 years a decade ago.

2. Since the previous assessment, new data and more sophisticated demographic modelling have become available, and new fishing policies from the European Union (Common Fisheries Policy, CFP) will apply, posing different scenarios for the viability of the species.  Thus, there is both an urgent need and an opportunity for a more reliable update of the conservation status of the species.

3. Demographic data were collected between 1985 and 2014 at one of the world’s largest colonies.  Most demographic parameters were estimated using multievent capture–recapture modelling.  Some parameters, such as bycatch rate, immature individual survival and recruitment, were estimated for the first time.  We incorporated estimates into stochastic population models to forecast time to extinction and assess the viability under different management scenarios, accounting for upcoming fishing policies.

5. Synthesis and applications.  Population projections suggest that the actual impact of fisheries on Balearic shearwaters is unsustainable and the imminent discard ban under the new Common Fisheries Policy may accelerate the declining trend.  This study demonstrates that reducing the bycatch rates of fisheries is an unavoidable and urgent conservation measure for avoiding the extinction of the species.  We also advise setting up demographic long-term studies, to allow researchers to diagnose, with reliability, the effectiveness of management actions.  These actions will also benefit many other marine top-predator species affected by this anthropogenic impact.”