Filming for Star Wars: Episode VII – The Force Awakens took place over two weeks during the seabird breeding season on the uninhabited Irish island of Skellig Michael.  The island lies 12 km off the coast of County Kelly in south-west Ireland and is a UNESCO World Heritage Cultural Site (since 1996) that was once home to a 6th Century Christian monastery made up of stone “beehive huts” for hermit monks.  Skellig Michael supports breeding colonies of some 10 000 pairs of European Storm Petrel Hydrobates pelagicus (10% of the national population) and when last surveyed 738 pairs of Manx Shearwaters Puffinus puffinus. 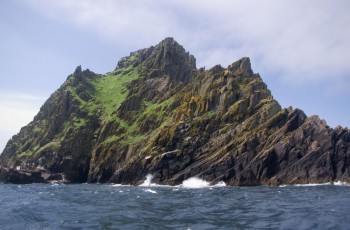 Irish Heritage Minister Heather Humphreys granted permission for up to 180 Star Wars cast and crew members to travel to the island to shoot the new film. Storm petrel and shearwater chicks would then still have been in their burrows.  Although there seems no definite reports of harm being caused to the island’s seabirds the filming has raised a level of controversy (click here).

Filming for an earlier Star Wars episode also took place on Skellig Michael and plans are now afoot for the dynasty to return to the island for Episode VIII (click here).