ACAP and CCAMLR sign a renewed Memorandum of Understanding in Hobart

The Commission for the Conservation of Antarctic Marine Living Resources (CCAMLR) renewed its Memorandum of Understanding with ACAP at its 34th Annual Meeting held in Hobart, Tasmania this October.  The renewed MoU was approved without emendation from the original text of March 2013 (click here).

Following on from the CCAMLR meeting the ACAP Executive Secretary, Warren Papworth and Andrew “Drew” Wright, Executive Secretary of CCAMLR came together in the ACAP Offices in Salamanca Square, Hobart to co-sign the new MoU at the end of last month.

The primary objective of the MoU is to facilitate cooperation between CCAMLR and ACAP with a view to supporting efforts to mimimise the by-catch of albatrosses and petrels listed in Annex 1 of ACAP within the CCAMLR Convention Area.  The MoU will remain in effect for a further three years. 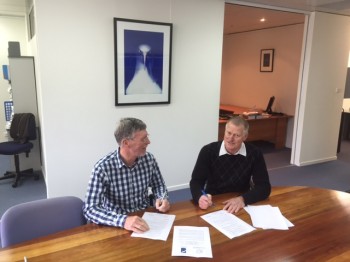 Click here for the newly adopted text of the MoU between ACAP and CCAMLR.