Minsmere is a nature reserve managed by the Royal Society for the Protection of Birds (RSPB) on the United Kingdom’s North Sea coast in the County of Suffolk.

On 12 July a Black-browed Albatross Thalassarche melanophris was photographed swimming in one of the reserve’s freshwater pools before flying out to sea shortly thereafter (click here).  For more photos of the albatross and a birder's description of the sighting click here. 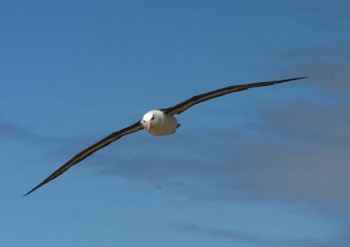 The Minsmere Black-browed Albatross in flight

Southern-hemisphere albatrosses cross into the North Atlantic from time to time (click here).