Assessing bycatch of Yelkouan Shearwaters by Turkish fisheries: a new project is launched

The Yelkouan Shearwater Project Turkey is about to launch the first seabird bycatch project in Turkey, a country for which there are no previous data. The project has been attempting to determine seasonal changes in the movements and numbers of globally threatened Yelkouan Shearwaters Puffinus yelkouan in the Sea of Marmara between the Mediterranean and Black Seas.  The project's team will now be collaborating with fishers to initiate a long-term monitoring programme for seabird bycatch in Turkish waters (click here). 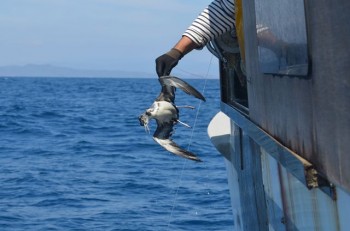 A Yelkouan Shearwater caught on a longline gets hauled aboard, photograph by Vera Corts

The shearwater, which has been identified as a potential candidate species for ACAP listing (click here), is included on Annex I of the European Commission’s Birds Directive. It has recently been uplisted to the globally threatened status of Vulnerable due to to "a rapid population decline, caused by extremely low breeding success and adult survival owing to fisheries bycatch and predation by introduced mammals". The Turkish (Bosphorus and Dardenelles) straits and the Marmara Sea hold an internationally important population of this threatened species.

The bycatch project will be supported by the Conservation Leadership Programme under a 2015 Future Conservationist Award entitled "Initiating a by-catch monitoring program for seabirds in Turkey" (click here).