Plans to save the Near Threatened Cape Verde Shearwater

The following text is précised and adapted from a report by BirdLife International.

The Cape Verde Shearwater Calonectris edwardsii is a breeding endemic to the Cape Verde Islands, recently recognised as a full species after being split from Scopoli's Shearwater C. diomedea.  The species is classified as Near Threatened and is protected by law in Cape Verde.  Unauthorised entrance to the islets of Raso and Branco, where the largest known breeding colonies are situated, is officially illegal, but there are limited means of enforcement or control of the law.  Uncontrolled high levels of hunting, poaching at main nesting sites, light pollution, invasive species and accidental mortality due to fisheries are the main threats that continue to threaten the species.

The Ministry of Environment of Cape Verde, in collaboration with a local NGO, Associaçao para Defesa do Meio Ambiente (Biosfera I) and with the support of BirdLife International and International Foundation of Banc d'Arguin (FIBA), organised a four-day workshop to identify conservation priorities. 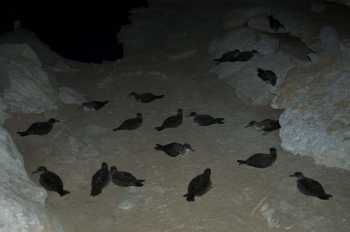 Workshop participants visited the Sinagoga fishing community on Santo Antao Island.  This gave everyone a chance to meet the former poachers of Cagarra (the local name for Cape Verde Shearwater) and to get an understanding of the socio-economics of fishing and poaching.  The fishing group is now working with Biosfera by taking the lead in conservation of the species and participating in its monitoring.

The institutions and organisations participating in the workshop committed themselves to implementing some of the activities identified in the plan and also accepted responsibility for communicating it widely to other stakeholders.