In recent seasons the Patagonian Toothfish Dissostichus eleginoides longline fishery in CCAMLR Statistical Area 48.3 in the vicinity of South Georgia (Islas Georgias del Sur*) has commenced a few days earlier each year.  The benefits of starting earlier include the chance of safer conditions at sea.  After many years of negligible bycatch of seabirds in this fishery one vessel has reported catching 74 ACAP-listed White-chinned Petrels Procellaria aequinoctialis on a single longline set on 16 April this year.

In the early years of this fishery in the 1990s large numbers of albatrosses and petrels were killed and as a consequence the Commission for the Conservation of Antarctic Marine Living Resources (CCAMLR) introduced a number of measures to reduce the bycatch, including limiting the fishing season to winter months, restricting the setting of lines to darkness, ensuring lines sink quickly and enforcing the use of bird-scaring lines, resulting in a reduction of bird bycatch to close to zero.  Following the introduction of these measures the fishery achieved Marine Stewardship Council certification.

Because of this success CCAMLR has, since 2010, approved an earlier start date for the season that has been incrementally and experimentally brought forward by five days each year.  The incidental catch of White-chinned Petrels occurred on a line set during this experimental extension period.  Mitigation measures in the fishery have now been adjusted so that vessels complete the setting of lines at least three hours before sunrise until 15 May to reduce the risk of incidental capture of any more White-chinned Petrels.

With thanks to Sally Poncet for information.

SAFRING Metal band 9A 69153 was placed on a Southern Giant Petrel Macronectes giganteus chick in the monitoring colony below Low Hump on Gough Island’s west coast on 30 November 2013.  On 18 May this year Josã Carlos Alonso Ruibal reported the bird to the South African Bird Ringing Unit as having been found dead on Karekare Beach, 35 km west of Auckland on New Zealand’s North Island 169 days after banding (click here).  The date of actual fledging of the chick is not known although it was still present at its nest site on 18 December 2013.

Juvenile Southern Giant Petrels are known to undertake large movements from their breeding grounds.  In contrast adults breeding at Gough appear to stay in the South Atlantic. 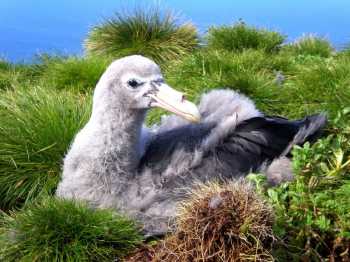 Perhaps related to this recovery is that the New Zealand Bird Rescue Charitable Trust based in Auckland has this month taken into care three Northern Giant Petrels M. halli.  The trust comments it is unusual to have as many as three at a time.  Photographs posted to the trust’s Facebook page suggest the birds are all recently fledged juveniles.  A Northern Giant Petrel brought in on 23 May is also being looked after in Ballina, New South Wales, Australia by Australian Seabird Rescue.

With thanks to Ben Dilley and Dane Paijmans for information.

“Many bird species rely on visual cues for mate choice, including those provided by body /size or by the size of a body appendage.  Mate choice based on size may lead to size-assortative mating, which may in turn have consequences for reproductive performance.  In this study, we examined whether body size influences mate choice decisions of Cory’s Shearwater Calonectris borealis, a seabird with nocturnal activity on land.  We found evidence of negative assortative mating for bill morphology (nostril height and bill length), but found no assortative mating according to body mass, tarsus length, and wing length.  In addition, we investigated the influence of negative assortative mating and individual body size-related traits on reproductive performance, i.e., laying date and breeding success.  We found that laying date and breeding success were not correlated with the extent of assortative mating, i.e., the assortatively mating breeders did not lay earlier and were not more likely to breed successfully.  However, we found that heavier females (body mass measured during pre-laying) laid later in the season.  We discuss these results in the light of possible effects of acoustic signals and foraging strategies on the mating pattern.  Furthermore, we suggest that some female attributes may be crucial for breeding success in Cory’s Shearwaters.” 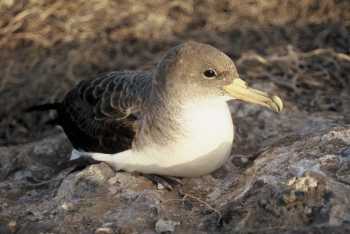 Jémérie Demay (Centre d'Études Biologiques de Chizé, Villiers-en-Bois, France) and colleagues report in the journal Antarctic Science on the Northern Giant Petrel Macronectes halli breeding for the first time on Amsterdam Island in the southern Indian Ocean.  A single pair hatched its egg, with the chick having disappeared by 21 December 2013.  It is considered the breeding attempt failed.  Breeding was not observed at the same locality the following season, although displaying birds were present. Amsterdam now becomes the most northerly known breeding site for the species.

Cheesemans’ Ecology Safaris, a USA company, plans to take a group of seven tourists and an expedition leader south on the 26-m Hans Hansson to help support a decadal count of breeding pairs of the island’s Wandering Albatross population.  Information from the albatross survey, to be led by island veteran Sally Poncet, will be made available to ACAP.  The ship will carry up to four scientists who will undertake the actual counts.

According to the tourist company’s website participants will have the opportunity to join the scientists ashore to assist with the survey or explore with professional photographer Scott Davis.  Some of these visits will be to localities not normally open to tourism - such as Albatross Island in the Bay of Isles and regions along the main island’s south-western coast under special permit (click here).  The expedition is set to last for nearly four weeks and intends to circumnavigate the main island.

Populations of Wandering Albatrosses in the South Atlantic have been decreasing over recent years leading to ACAP identifying them as being a high priority for conservation action at its Fourth Session of the Meeting of the Parties held in Lima, Peru in April 2012 (click here).  Data from the planned survey should provide an indication of the island’s current population trend and address the requirements of article 4.1 of the ACAP Action Plan, providing essential information to aid in the species’ conservation.