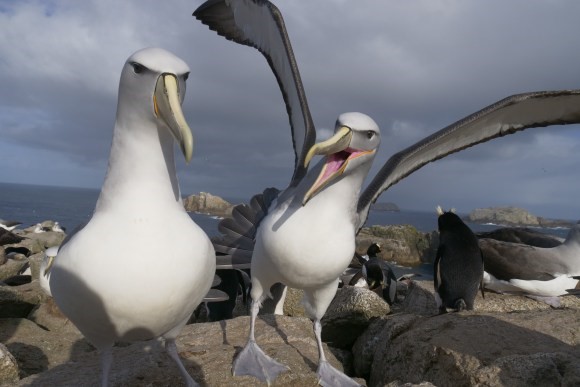 The Bounty Islands are bare, windswept and home to thousands of Salvin’s Albatross

The following ‘conservation blog’ was posted on last week’s World Albatross Day as part of New Zealand’s celebrations of the event.  It is reposted here with the kind approval of the Department of Conservation (DOC).

It would be hard to imagine a tougher place to raise a family than the Bounty Islands, a cluster of bare rocks in the middle of the Southern Ocean.  Four days by boat from New Zealand, these granite domes are cold, wave-swept and most lack any vegetation larger than lichens.

But the Bountys are sought-after real estate for [globally Vulnerable] Salvin’s Albatrosses Thalassarche salvini.  Tens of thousands of the stern-looking birds cram onto the islands each spring to hatch a single egg in a nest made of the most plentiful material available – poo.

Researchers Graham Parker, Kalinka Rexer-Huber and Paul Sagar have spent a few precious days on the island in the last two summers to help solve some major mysteries about the species: how many breeding birds there are, and where they go on their annual migration.

“Just getting onto the islands is a mission.  We wait offshore for calm enough conditions to land, though it’s more of a full body contact scramble than a landing!  We’re exceedingly cautious about picking the weather because it’s such a long way away from help if anything went wrong.”

Camping is off-limits to avoid disturbing the wildlife.  Graham says even stepping onto the island feels very intrusive.  “It’s a busy and noisy place and we can’t help but disturb things because it’s so densely populated.  We have to be very careful to get our work done efficiently with minimum impact, then leave them all to it.”

The team is using new technology – drones and satellite-transmitting GPS trackers – to find out more about the Salvin’s Albatross, a species that is as endangered as our Kakapo.

Drone images are proving to be a better way to count the number of breeding birds than the previous aerial photos taken from aircraft.  “Those photos tended to be quite fuzzy and indistinct, but drones can fly close to the islands and get some fantastically crisp images.  They should give us a much more refined estimate of the population.”

Kalinka says what you count is really important.  “From a conservation perspective, it’s the breeding pairs that matter because they’re producing the next generation.  But there are lots of non-breeding birds around and some are sitting on nests with no eggs, which you can’t tell from an aerial photo.  So any counts from aerial photos need to be calibrated by recording the actual proportion of nesters vs pretenders on the ground in a defined area.” 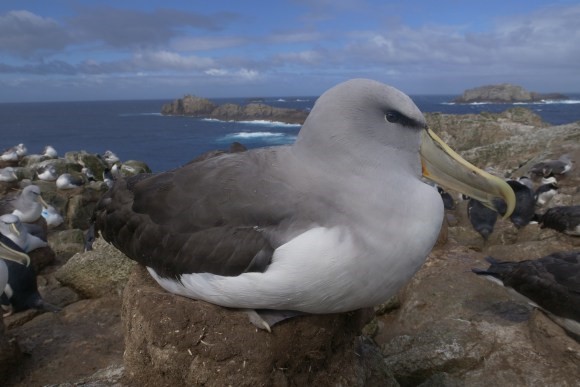 “Birds and fishers go to the same places because they’re after the same resource – fish.  If we know where the birds are going, we’re in a better position to reduce interactions and keep more birds alive.”

Two different types of trackers were attached to birds as a comparison.  The data show exactly where they go on their annual 7000-km migration to the coast of South America. 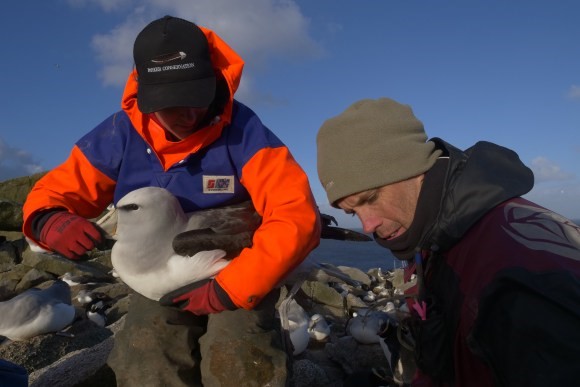 Holding an albatross so the tracker can be attached. Kalinka says they are the size of a medium-size dog but much lighter.  Photographs by Bill Morris

“We put satellite transmitters on 30 birds.  These cost thousands of dollars each but show us the birds’ location in real time and don’t have to be retrieved (they are attached to back feathers that eventually fall out).  The other trackers – geolocators – are only worth a couple of hundred each but have to be collected to get the stored data back.”

One bird’s tracker stopped transmitting in New Zealand waters and another stopped in South America (that device may have run out of battery).  Data from the geolocators are still being analysed.

“There’s now tons of support for conservation on land, but there’s a disconnect with conservation at sea.  These magnificent birds aren’t as easy to see as our bush birds or dolphins, but they’re just as much our taonga [treasured possession] and our responsibility.”

Graham and Kalinka’s take-home is that we can all do something: we can be more discerning about the fish we buy.  “Ask where it came from, how it was caught and what the company is doing to stop birds being killed.  And take any opportunity you can to get out on the water and say hi to these incredible animals!”

Parker Conservation was sub-contracted by NIWA for this research, which was funded by DOC.  Paul Sagar, a NIWA scientist, has a long history of seabird research in New Zealand’s sub-Antarctic region.

View a 12-minute video made on the trip under DOC research permit by photographer, Bill Morris and read an illustrated account by Thomas Mattern (see reference below).

While on the island, the research team displayed one of the first World Albatross Day banners, now entered into the ‘WAD2020 Banner Challenge’, along with many others from New Zealand and elsewhere.