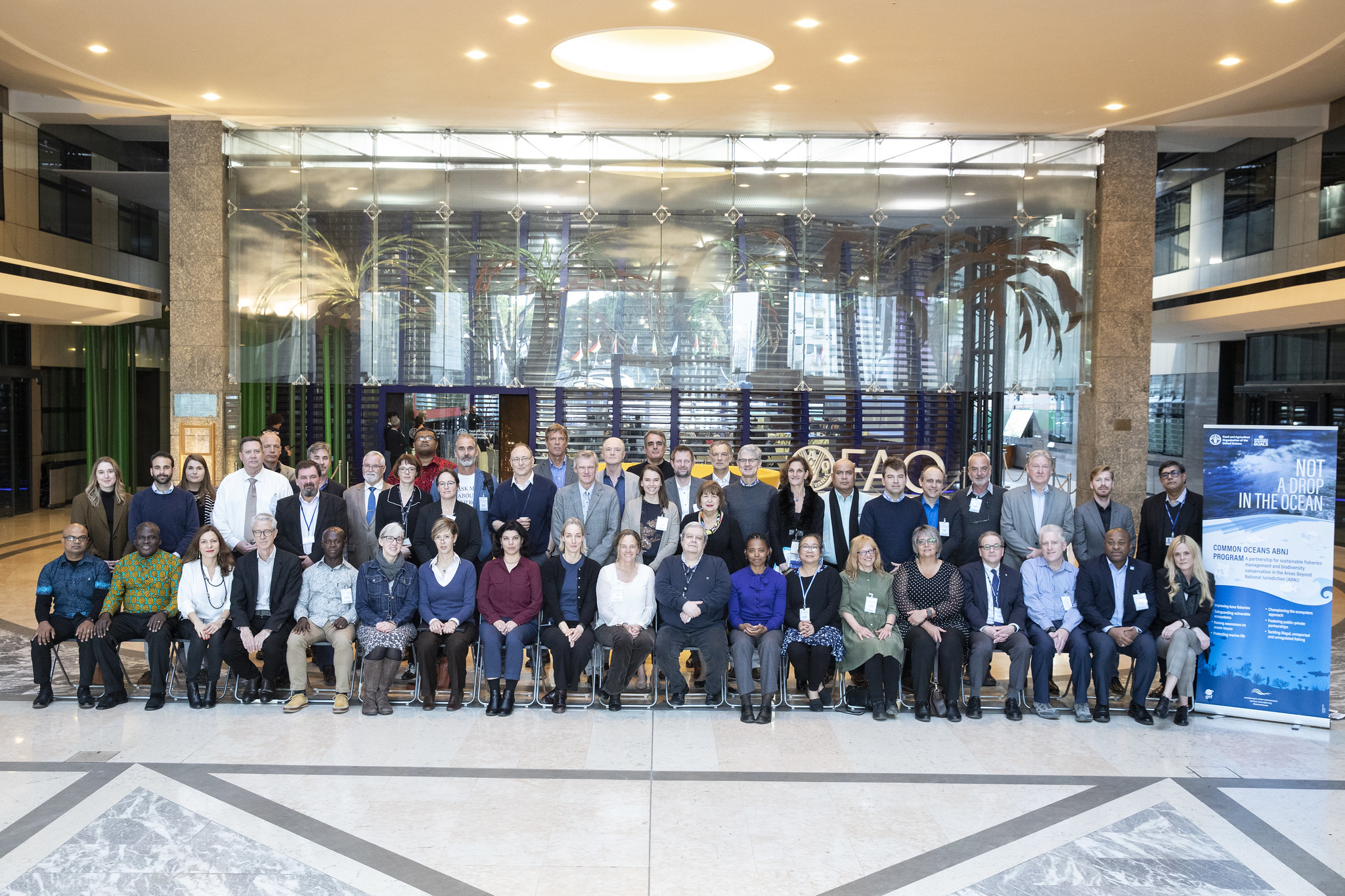 Attendees at the Common Oceans ABNJ Program meetings in Rome, January 2020; ACAP's Executive Secretary, Christine Bogle is sixth from the right in the front row

A meeting of the Global Steering Committee of the Common Oceans ABNJ Program, Food and Agriculture Organization of the United Nations (FAO) was held in Rome, Italy over 29-30 January this year.  It was preceded over 27-28 January by the seventh meeting of the Project Steering Committee for the ABNJ Tuna project which is a key part of the overall ABNJ programme .  The meetings were held to mark completion of Phase 1 of the programme and to finalise proposals to be put forward to the Global Environment Facility (GEF) for a second phase. The GEF had provided funding for Phase 1 of the programme and it is hoped that they will also provide funding assistance to Phase 2.  Co-financing came from a range of entities, some of it in kind.

The Common Oceans ABNJ Program aims to achieve efficient and sustainable management of fisheries resources and biodiversity conservation in marine areas that do not fall under the responsibility of any one country.  It is focused on those areas beyond national jurisdiction (ABNJ) - also known as international waters or the High Seas - that cover 40% of the earth’s surface and comprise nearly 95% of the oceans' volume. Phase 1 of the programme comprised several projects, the two main ones being the Tuna project and the Deep Sea project.  ACAP has been a participant in the ABNJ Tuna project since its inception almost six years ago. The Tuna project  had the aim of continuing to strengthen governance in international waters; reinforcing measures to combat Illegal, Unregulated and Unreported (IUU) fishing; making further progress in protecting international waters' biodiversity by rendering fishing in these waters less harmful to several marine species, including sea turtles, tuna and seabirds; and improving coordination among those with an interest in the sustainable use of international waters.

The Agreement was represented at the Rome meetings by its Executive Secretary, Christine Bogle.  She writes: “ACAP is pleased to have participated in the first phase of the FAO/GEF Common Oceans ABNJ Tuna project, which concluded at the end of 2019.  We contributed ACAP expertise to the first global assessment of seabird bycatch in pelagic longline fishing in the Southern Hemisphere.  In this assessment, a wide range of modelling approaches was used, producing very similar estimates of approximately 30 000 - 40 000 birds killed a year, highlighting the continued threat faced by ACAP-listed species.”

Through the Common Oceans Tuna project, ACAP in the second half of 2019 received support from the FAO for the updating, translation and printing of several of its mitigation fact sheets and best-practice guidelines.  In addition, an update of the Seabird Identification Guide (currently available in six languages) will be completed soon and made available.  In the preparation of these and other products, ACAP cooperates closely with BirdLife International.”

Read FAO posts on the programme and the meeting.

Earlier postings to ACAP Latest News on the Common Oceans Program can be accessed here.